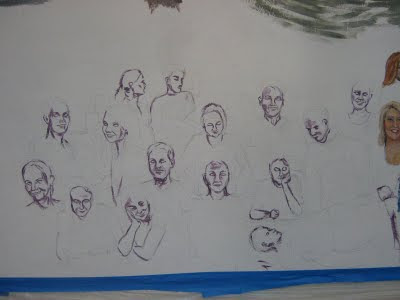 This evening I'm very grateful that I've made the commitment to take photos everyday I work and post them. Now that I look at the photo I realize that I did good work today, and actually accomplished quite a lot.

During the day, I was down and discouraged -- the blahs. I didn't feel like I had really painted even though I spent nearly five hours working at the wall. Those five hours were spent planning where each of fifteen students would go, and sketching them in. I was particularly discouraged, because I spent a great deal of time on one pair of radiography students, drawing in more details than I usually do (including a big x-ray machine), and then realized that I had located them far too low down in the painting. I had to haul out the brand new erasers I bought just yesterday (handy!) and erase a huge area, then start over a foot higher up and to the right.

Then I mixed a new batch of my dioxazine purple/burnt umber/unbleached titanium shadow hue, and painted in all the shadows for all fifteen faces. Only after I did that, did I realize that some of the people in the foreground, especially their faces were noticeably smaller than other foreground faces elsewhere in the mural. I felt discouraged, worn down. However, looking at the photo of what I did now, I can see that while true this is not a fatal flaw. Yet another reminder that perfection is not necessary. As I believe John Kerry once said, I'm not going to let "the perfect be the enemy of the good."
Posted by sgreerpitt at 9:13 PM

Sue,
You sure do have many artistic talents.