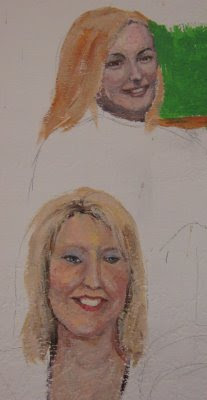 Several people today asked me how much time the mural represented. Good question! This is the twenty-fifth day that I've worked directly on the mural. The least amount of time I've spent working was four hours, the most was seven hours. The average has been about five hours, not including time spent in my office preparing photos and printing them out. So twenty-five days times five hours a day, is 125 hours. And I'm about four-sixths done. Not too shabby.

Sometimes one of the faces comes out really nicely, and other times, there's something seriously off about a face. The picture on the right illustrates both. The face at the top is one that I'm tickled with. It's not that this face looks just like the original photo (it's not suppose to), but it is attractive, and realistic. The face at the bottom, is actually more reminiscent of its model, but it is distorted. 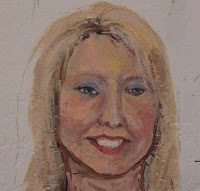 I spent some time playing with Corel Paint this evening, and believe that I can fix this face with some very small changes: a) the chin, especially on the viewers left is too long and broad, and needs to be brought in, b)in putting in the young woman's make-up, I lost too much of the shading above the eyes, and that needs to be added back in, c) the bottom portion of the models nose is longer and the shaft above it shorter, and d) the teeth need some shading. The graphic to the left shows some of the changes I plan; I am not yet fully adept at using Corel Paint and the Genius tablet and pen that Southeast provided to all of us who teach on-line classes. 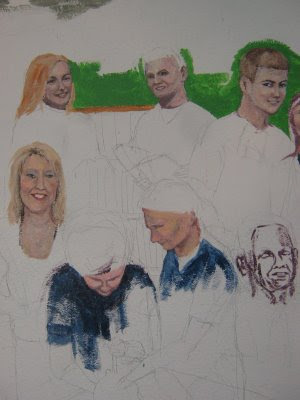 To the right is the overview of all that I did today: six new faces sketched in, three completed in detail, two with the color roughed in but no fine details (eyes & lips). (By the way, you can always click on the photos and see everything larger).
Posted by Sue at 6:35 PM

I like how this is coming. You are a natural at portraiture.

Sue, they are wonderful! How do you get the details right? Do you have to keep stepping back to look?

I do indeed have to keep stepping back. One of the dilemmas of painting -- you have to be within arms reach to paint, but you can't really assess how you are doing until you get back about ten feet!