My all time favorite website is http://www.dogshaming.com/ where people post adorable photos of their miscreant pups. It reminds me of how much worse our doggies could be (and have been), and it reminds me of how we learned how to live with dogs. 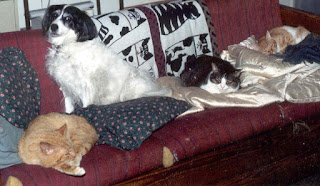 Our first dog, Missy, was a grown up three year old when he rescued her from a shelter in Tennessee. She had been thoroughly trained and was by the time I met her five years later a quiet, well-behaved adult dog. When she got very old (she lived to the ripe old age of 19) she had doggie dementia and although she always went to the door to be let out she didn't always wait until she was let out to go. But she was our baby and that was okay.

A year and a half after Missy died, Rosie dog applied for the position of "dog of the house". Rosie just showed up in the yard, and on the porch, and hung out until we knew what she knew - the we were her humans. We thought we knew all about dogs, but Rosie taught us differently. She was young but big, and a dominant dog who wanted to be boss, and a little bit scary. The wonderful trainers at PetSmart helped us turn Rosie into a wonderful companion dog, who was still assertive, but knew that humans set the rules. In the process however, we lost lots of things, clothing, shoes, books, pens, blankets, pillows, dog beds, and one entire couch.  Rosie grew or was trained out of all those bad habits, but it took a long time, and more change on the part of the humans than on the dog. Gates had to be put up, shoes and socks couldn't lie on the floor, everything had to be tucked a way out (not just out of dog reach, but where cats couldn't knock it down into dog reach). 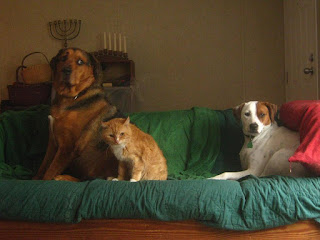 We'd had Rosie for five years, when Molly showed up.  Molly knew we needed an "auxiliary back-up dog", and pretty soon we did too. Suddenly pillows, blankets, rugs, and especially books were again at risk for chewing.  We sealed up every book shelf Molly could reach with plastic sheeting.  Molly had some new tricks - like eating remote controls (four in total).

So we made some adjustments, our wonderful open-concept new house, got two sets of dog gates with cat passages in them so that cat boxes (and all that lovely cat poop) as well as cat food stayed totally out of Molly reach, as did the garbage and the food, and other tempting items. New end tables with drawers for all the remotes and reading glasses and other crunchy items. Shoes are on top of dressers or shut behind closed closet doors. Bathroom doors are closed (against cats as well as dogs) so that no paper towels, bath towels, toilet paper, or other goodies can be shredded. 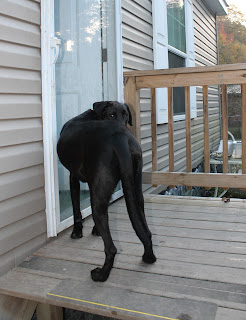 By the time we adopted blind Bob this fall, we had this keeping things out of dog reach pretty much down to a science - except for the throw rugs which have been sacrificed to the cause.  Between the cats and the dogs, some things do get chewed - especially gloves, which the cats love to dig out of the big basket for outerwear and then drop on the floor for doggie tug-of-war. But we deal with that by buying cheap winter gloves by the dozen.


Life with dogs (and cats) is wonderful, but it takes a lot of work and paying attention to make sure that no one gets into something that could hurt him or her, and that things that are really important and valuable don't get eaten.
Posted by Sue at 9:59 PM 2 comments: Links to this post 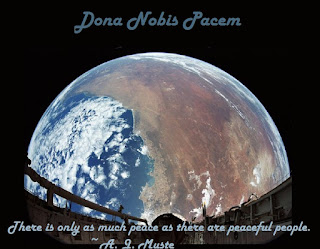 In June of 1965 at Junior High School graduation my  14 year old self spoke to an auditorium of my fellow graduates and called ours "The Hopeful Generation."  Among the things that I thought we had hope for was the curing of disease, the alleviation of poverty and the attainment of world peace.

At age 61 my hope is a little tattered but still there. I think we've made progress on all those fronts. But we still have such a long, long way to go. As long as there are still people who hold these goals we have a chance. That's why I love Blog Blast 4 Peace so much, it tells me that the dream is still alive and that there is still hope.