Sociologist Annette Lareau developed the concepts of "concerted cultivation" and "the accomplishment of natural growth" as two different patterns of child rearing practiced by different social classes with "concerted cultivation" being the preferred child rearing style of the middle and especially upper middle class parents, and "accomplishment of natural growth" the preferred child rearing style of working and lower class parents.

Although I grew up in a blue-collar, working class neighborhood, where my father, a machinist, was one of the lowest earning workers, both of my parents had come from middle class families. My father was the only one of his siblings who did not go to college (due to his having graduated high school in 1930 just after his family was financially devastated by the stock market crash), and my mother had gone to college and gotten a teaching certificate and spent seven years teaching school before marrying.

The result was that my childhood experiences were highly controlled, scheduled and focused around education (concerted cultivation), while those of my neighborhood peers were unstructured, largely free of supervision and centered around fun (accomplishment of natural growth).  This was most obvious in the summer time.

When school ended each June, my neighborhood friends were usually pushed out of the house each morning by their mothers, who didn't want their children in the way while they were cleaning house and watching soap operas. This was California, in the SF Bay Area, where rain was non-existent in the summer time, so bad weather never forced kids inside during the summer time. The children were left to entertain themselves and only grudgingly allowed back in their houses to use the bathroom, get something to drink or eat, then encouraged back outside.  Every child had a bike, most children had roller skates (the metal kind that clamped on to shoes) and the neighborhood had excellent level, continuous sidewalks on which to ride and skate; games of tag, hide and seek, four square, kickball, catch, and many others spontaneously erupted.  Girls also played jacks, hopscotch, played with dolls outside. Boys had comic books, and some access to tools and wood to build things like skate boards and other small items.

While our friends spent their summers in almost total freedom of unstructured play, our summers were quite different. Our mornings were always organized into some type of educational activity.  My mother's obsessions changed from year to year. One summer she focused on math, and we spent several hours doing math problems. Another summer our lessons focused on learning Spanish. Another year we spent a lot of time reading the Bible and memorizing Psalms. Whatever the focus, two to three hours of every summer morning were organized around some type of learning activity.

Every summer involved substantial time for reading. My mother took us to the public library near us (about 3/4 of a mile away) at least once a week, if not more often. Each of us selected books that we would read ourselves, and my mother selected books that she would read aloud to all of us in the evening - all of the books by P. L. Travers (Mary Poppins and more), Beverly Cleary's books (Beezus, Henry and Ramona, etc.), as well as classics like Treasure Island, Swiss Family Robinson, etc.

Even when we were allotted playtime, we rarely had the same degree of unsupervised freedom as our friends. My mother would recruit the other children to come to our yard and teach everyone games from her childhood. She taught us  Red-light/Green-light, Simon Says, Duck-Duck-Goose, Puss in the Corner,  and many more whose names I've forgotten.

Unlike the other mothers in the neighborhood, my mother had little interest in housekeeping (beyond the necessities of cooking and laundry). Moreover, our household furnishings were old and shabby second had pieces, and we lacked carpeting.  So unlike the other mothers she did not mind having dirty, noisy, children tromping in and out of the house. She encouraged other neighborhood children to play in our yard, and to join us indoors for afternoon for organized arts and crafts activities.

My father was also unlike most of the other fathers when he was at home. He cared little for having the perfect lawn and put little energy into yard work. As a result he did not mind having children digging holes in our yard, or building forts or other things in the yard.  He preferred to spend his time at home in his workshop building things, and liked showing children how to use tools and make things.

My family's relationship to television was different from the other neighborhood children as well. In the other households the television reigned supreme in the evening hours, with both adults and children watching programs during prime time. Our television was almost never on in the evening. My father took classes at the community college through our entire childhood and he was often studying in the evenings. He had little interest in situation comedies or the other staples of 1950's and 1960's TV. My mother on the other hand loved TV and comedies, but in deference to my father did not watch TV in the evenings. Instead she watched TV during the mornings when the popular situation comedies of the day were "stripped" five days a week. Almost all of my familiarity with television in my childhood came from watching with my mother on summer mornings.  When I was really little  we watched things like O Susannah (Gayle Storm), George Burns and Gracie Allen, and George Benny; as I grew older her favorite shows became the Dick Van Dyke show, Bewitched, Donna Reed, Father Knows Best, etc.

As a child I was often envious of my friends and their freedom in the summer.  It was only as an adult that I came to appreciate the was in which my mother shaped our time around learning.

In Memory of Mat 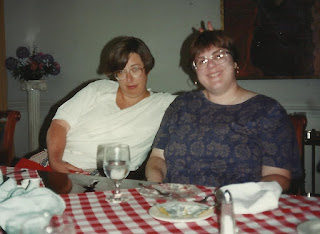 My cousin Matilda was 8 years older than me. Growing up she was an exciting, awesome figure in my life. I didn't get to see her but every couple of years, but each encounter was fraught with significance. She was smart, funny and sassy and I admired her enormously.

I have a number of extremely vivid memories of Mat from childhood.

One summer when we were all together in our parents' childhood home of Troutdale, Virginia, Mat (then a young teen) took a whole troop of children including me and my little brother Charlie as well as several local children on a hike down to the creek and the swimming hole, without telling the parents where we were going. We came back hours later, hot, sweaty, sunburnt, our legs scratched from the brambles, and deliriously happy with great memories of water striders, newts, crawdads, and wading in the cold stream. I think the grownups yelled at Mat for scaring them.

A couple of years later, also in Troutdale, I remember Mat showing me how the neighbor's baby goats like to climb on things by getting down on the ground and letting the goats climb on her back.


When Mat was 18 (and I was 10), she had a VW Beetle - a convertible VW Beetle! This was the most awesome thing I'd ever seen. This was about the same time that I learned that Troutdale a little town I knew and loved was in located in "Appalachia" - a place that took on mythical proportions in the early 1960's. I made a vow about that time in my life that when I grew up, I was going to be a school teacher in Appalachia and have a VW Beetle (maybe even a convertible!).  It was by no means an accident that my first car (in 1975) was a VW Beetle, and I drove it all over Appalachia while I researched my Masters Thesis and Dissertation.

One of my best Mat memories is from when I was 18 (Mat was 26) and I graduated from high school. I had my very first trip on my own as an "adult" to visit Mat in San Diego where she was a Navy nurse. She took me all over San Diego, to all the tourist spots (Marine World, the San Diego Zoo, etc.), in her sporty little MG convertible. The best part of the trip was the party she and her roommate threw: they invited not only their nurse friends but a whole bunch of young Navy men! Men, dancing and beer! How could one not idolize a cousin like Mat.

As we got older the age difference mattered less. We became friends, who wrote, called, and visited. Mat's the reason I got on Facebook, she kept bugging me because she wanted to share pictures. Another way that we were able to keep touch with each other.  I will miss my cousin Mat. May she rest in peace.