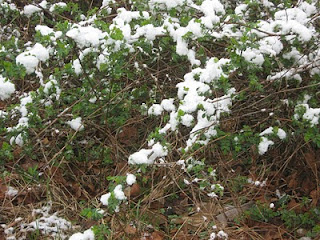 "small stone 016 Snow Blossoms" is licensed under a Creative Commons Attribution-Noncommercial 3.0 United States License. Permissions beyond the scope of this license may be available at http://sunflowerroots.blogspot.com.
Posted by Sue at 8:22 PM 2 comments: Links to this post

humor from the land of dementia

This is so pitiful and yet funny, I wanted to share it.

My mother is cold all the time. A condition that most elderly people experience. Some of her problem is that she is unwilling to wear sufficient clothing to protect herself from the cold and drafts while she is indoors. She complains that warmer clothing is too heavy and the weight hurts her skin. In particular she shies away from anything around her neck and lower arms, and lower legs (she wears Capri length pants year round). The other contributing factor is that she has also forgotten how to work the thermostat, but cannot admit to anyone that she no longer understands how it works.

Unwilling to face and acknowledge that her own frailties are the cause of her lack of warmth she has devised a number of conspiratorial theories to account for why she is cold now, when she does not remember being cold in the past. My brother told me that one of her frequent complaints is that the utility company (Pacific Gas and Electric) "turns down the electricity and gas" at night so that the heater doesn't work as well as it should.

In our conversation yesterday, she revealed her new explanation - that the freezer stocked full of frozen food by my brother Charlie on his recent visit, is sucking away the power from the natural gas heater making it too cold in the house. She preceded this explanation by a phrase that I have come to dread: "I woke up in the middle of the night, and got to thinking about this problem I have with being cold all the time..." Every time my mother says that she "got to thinking about" anything it's usually trouble.

This particular explanation -- of the frozen foods draining away power from the heater -- she came up with had the virtue (in her mind) of placing the blame on my brother, whom she is very angry with at the moment. It has become necessary for him to take away more and more of her financial decision making power. She can no longer figure out money at all - she cannot interpret her bank statement, can no longer correctly write a check, confuses amounts of money (mistakes $4 for $400, and $4,000 for $40,000), no longer is able to make use of debit cards and credit cards without substantial assistance. At times is willing to acknowledge it to me, but views my brothers necessary steps to safe guard her financial security as an insult to her. "I'm not so poor as he thinks" she says frequently and angrily (meaning incompetent, not poverty struck).

It's other virtue, unfortunately, was that it was something she felt she could act upon without consulting others. So early in the morning, she carefully removed every single item of frozen food from the freezer, and stacked them in the garage. Hundreds of dollars of food that my brother had purchased to keep her fed over the next month.

For some reason, my mother felt the necessity of writing down information about each package that she removed. In telling me this story, she seemed to think that she would need this information when she talked to the utility company about her energy problems. The best I could tell is that she thought that some types of frozen food sucked up more power than others (??).

Luckily for everyone, it was not long before Jennifer (her wonderful health care worker) arrived. Jennifer patiently explained that the refrigerator used electricity, while the furnace used natural gas, so that there was no connection between the two things. It was clear in our conversation, that my mother does not believe this for a minute. But she was willing to accept that no one else would believe what was obvious to her, and she agreed to put all the food back in the freezer.

Once my mother gets an explanation lodged in her brain for something that puzzles her, it does not matter how many times people tell her differently, she will never let it go. For example, more than a year later, my mother is still convinced that the reason why "there's never anything good on TV any more" is because of that "darn box" she was forced to put on the TV. The "darn box" is of course the digital converter box that allows her to continue to get over the air broadcast television on her old analog set, and has nothing at all to do with the programming decisions of the stations she receives.
Posted by Sue at 2:09 PM 6 comments: Links to this post 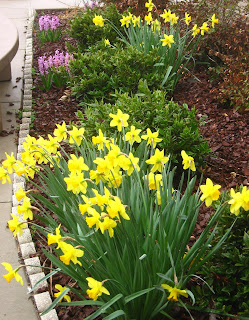 Spring break was wonderful -- just that short period of time away from the whirl of classroom sessions was a respite. Not that I wasn't working the whole week on grading exams, keeping up with my on-line classes, and writing a book chapter. But any change in pace is appreciated. The only truly negative side of spring break is that all the campus flowers bloomed while we were gone. At least the daffodils were still bright to welcome us back.

The thing I like most about spring has been the regular progression of color. The first thing is always the forsythia and the daffodils - brilliant yellow to ward off the doldrums of winter.
Posted by Sue at 1:38 PM 2 comments: Links to this post

One of my favorite bloggers, a lovely lady from England is Maggie May. Her profile begins with the sentence: "Not to be confused with the other Maggie May!"

So every time I visit Maggie's blog I am reminded of Rod Stewart's song "Maggie May," which is something of a bitter sweet reminder. While I love the song, in recent years listening to the lyrics carefully has made me uncomfortable. In particular the line "You lured me away from home/just to keep you from being alone," haunts me.

You see, I just may have been a "Maggie May" once upon a time.

My first husband was eighteen (I was 32) when we met, nineteen when we began dating, twenty when we married, twenty-one when he left me, and only twenty-two when we divorced. At the time it felt like he pursued me, like the relationship was equal and mutual. But over the years as I've heard of his struggles in life with addiction, relationships, and careers, I question my perception.

For me, the relationship, despite its brevity, was an overwhelmingly positive force in my life. Even the pain of loss and divorce was a gift that helped me become a better, more insightful, balanced and emotionally richer person.

I hate to think that my gains were another person's losses; so everytime I hear "Maggie May" I wonder. Was that me?
Posted by Sue at 4:20 PM 3 comments: Links to this post