The second blog post I ever made (back in 2005) concerned an environmental puzzle that I had observed for some 15 years. It is now eight years later, and I am no closer to having a real answer to my question. 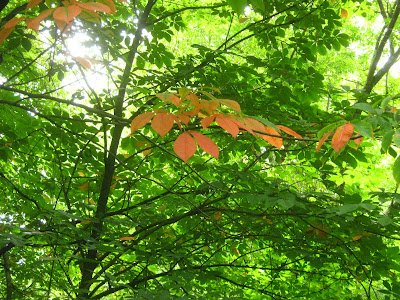 Since 1989, when I moved into this part of central Appalachia, I have been observing a trend with the Ohio Buckeye tree.  These lovely trees can be seen all over eastern Kentucky, southwestern Virginia and northeast Tennessee. They have large hand shaped pinnate leaves in groups of five.  They seem to like moist areas and are often seen along creeks and rivers (and the roads that run along creeks and rivers).

Guides to eastern trees speak of the gorgeous pumpkin orange color of Ohio Buckeye trees in the autumn.  However, my environmental puzzle concerns why the Ohio Buckeye has been showing fall color earlier and earlier each year for the past twenty-four years. 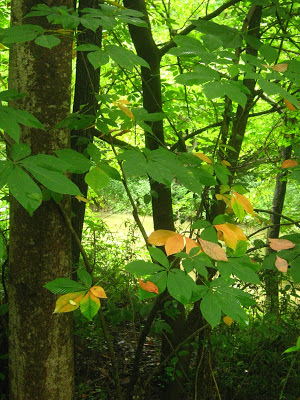 When I first arrived in the region, the Ohio Buckeye changed color at the beginning of the normal autumn season in late September or early October. Between 1989 and 2005 I observed the Ohio Buckeye beginning to show it's brilliant color earlier and earlier.  In my 2005 post, I observed by early to mid-August. Since 2005, the color change has moved even earlier. This year, the color change began last week - the first week in July. The images here were taken today, July 5, 2013 in Kingsport, Tennessee along Reedy Creek from the Kingsport Greenbelt pathway.

This is how it begins a small branch or two of each tree turns brilliant color, then more do, and then the leaves turn yellow and brown and fall off - MONTHS before any of the other trees in the forest. Each year the process of turning color and losing leaves gets earlier.  A tree that once turned color in late September early October, now begins turning color in June and July and has lost all its green leaves by August. At some point in time, if this continues, the tree will not have green leaves long enough to provide the energy it needs to keep on living.

What is going on? Why is this happening? There does not seem to be any pest involved. Is it changing climate? If so what is it about the climate?  Central Appalachia is getting both measurably warmer, but also wetter.  We've just completed one of the wettest Junes on record. 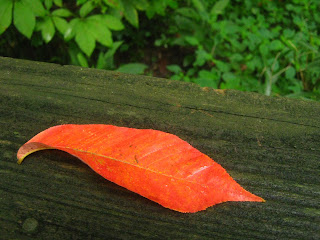 Anyone out there know someone with an answer?