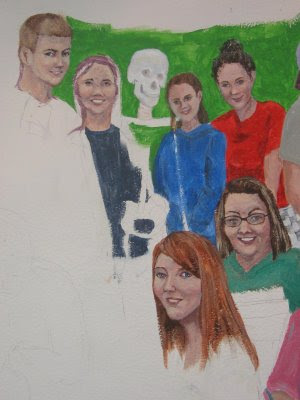 Today was one of my most productive painting days. I completed six faces--the most I've done in one day--and provided clothing to several of them. Did a little more work on Mr. Skeleton.

Today was also a productive planning day. I've been finding new photographs, from my own files, from students and other faculty, that will fit into the mural. This is rather like working on a free form jigsaw puzzle. I need to find poses that will fit well, leaving the least amount of empty space. While I have a general plan for where each student should go, the specifics of exactly how to fit in each person can only be decided as I reach that place in the mural.

Among the many visitors who stopped by today to chat, was a former student J. Paul, whose face was the first I painted in the mural. When I saw him, I wanted to take his picture so I could redo his portrait. When he was a student here he had a super short buzz cut. He has since let his hair grow -- turns out he has the gorgeous dark wavy hair. He looks so much better. But he was in a hurry to get to a meeting. I might still change the painting anyway!

Here's an overview of all the students so far: 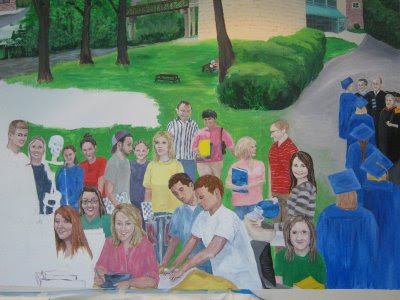 Posted by sgreerpitt at 9:28 PM