bored out of my skull 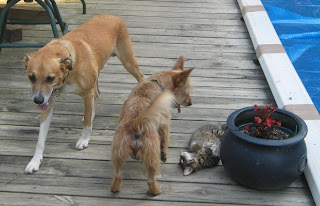 I am definitely not suited to inactivity. Yesterday morning, on the last day I was caring for Pam and Mike's animals (see the sweet photos of Dip, Tuggles and two of the kitties from Wednesday), I hurt my back lifting a much too heavy bucket of water. Totally my fault. I knew I shouldn't lift that much weight. I could have made two trips, but I was being lazy. Fifteen minutes later I was doubled over in pain.

After limping across the lane home, I tried muscle relaxants and heat, and fell asleep in my wonderful recliner. But by noon, I woke again in more pain feeling feverish and nauseous and began to wonder if it was more than muscle spasms (appendicitis crossed my mind). 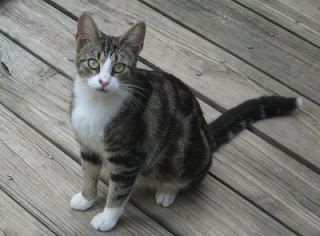 So John gave up his entire afternoon of grading papers to accompany me to the doctor (as driving myself was out of the question). Hours of waiting and several tests later the verdict was simple muscle spasm. Off we went to the pharmacy with prescriptions for prednisone and more muscle relaxants, and very strict instructions to spend a day or two in my recliner with a heating pad -- absolutely NO scaffold climbing!

At first this morning it felt nice not to have to be rushing around getting all my stuff ready to go paint. I spent a little bit of time in the morning at the computer getting caught up with the on-line class I'm teaching. [The students this summer are unaccountably inactive, nice for me, but not so good for their grades.] But an hour in the computer chair was a bit much.

So the rest of the day has been spent, as ordered, lounging in the recliner with the heating pad. The SyFy Channel (why did they change the name??) was running a marathon of one of my favorites "Eureka!" and that was entertaining for a few hours. I napped a little. Ate way too much. Even low fat, sugar free pudding is not so good for you after the second serving!

You know you're bored when even Dustin Hoffman and Emma Thompson can't engage your attention. I found myself fast forwarding through portions of "Last Chance Harvey." The movie has it's sweet moments, but I had little patience for the pacing. I did particularly like Harvey's response at the end, when Kate asks him "how is this [relationship] going to work?" and his response is "I don't know. But it will. I promise." Optimism, commitment, faith -- all good qualities for starting a relationship.

So here I am blogging. I can already feel a few twinges and know that it will be back to the recliner and heating pad in a few minutes. It's almost time for my evening call to my mother, and then it's not long until SyFy Channel (again what's with the name change?) airs a new episode of "Eureka!" so I suppose I'll make it through until bedtime without expiring of boredom.

One perk of spending the day in the recliner, is that I've had plenty of feline company. I've been so busy since starting the mural, that I haven't had much time to create "lap time" for my kitties. I like being a "cat mattress" for a day.
Posted by sgreerpitt at 5:29 PM

Oh Sue, I can so feel you! You take care of yourself now.

I really enjoyed reading this post, I am an Emma Thompson fan too --- I am bless you took the effort to write ... Thank you for your concerns about me, it made me feel so darn good. (((((MANY gentle HUGS))))

Our dispositions don't take a vacation from us. We are who we are. I hope your back is back soon, Sue!

So sorry to hear you have a bad case of the owies, but I hope you are finding some good stuff on TV and enjoying the cat-cuddle!

Sue,
I am so sorry to hear about your back pain and I can so relate to you...A while back I had three compounded fractures in my lower back and I thought I was going to die from the horrible pain.

I am a fan of The Twilight Zone and watched quite a few of the episodes on the 4th of July.

I have never met an Emma Thompson movie which I did not enjoy...she is a classic star...in her time.

Take good care of yourself and my thoughts will be with you as you deal with your back healing.

Boredom can almost kill a person`s spirit ...at times.

I'm sorry you hurt your back! I hope you're feeling better!

I just noticed that they changed it to SyFy the other night while I was catching up on my new "Ghost Hunters International"...I don't get it... (something to do with "sci-fi being a generic search term??)

Sorry to hear you hurt your back! However, looking at the pictures of the mural, it seems as if you are back in business!