Pictures in My Mind

This morning an old friend posted a beautiful picture of a transitory moment when sun through a window was captured by an elegant, blue blown glass vase and then scattered across the room.  Without his picture I am sure that you are having difficulty imagining the fragile luminosity of this moment.

It has been said so often as to become trite that a picture is worth a thousand words. But trite does not mean untrue. Well crafted words, whether poetry or prose can evoke elaborate mental images, even whole worlds in our minds. But the right single photograph can fix one moment, one experience that defies adequate description  and make it available for sharing and keeping for several lifetimes.

Richard's picture was taken with his cell phone camera because as he said if he'd taken the time to go upstairs to get his good camera the angle of sunlight would have changed and the moment would be gone. The ubiquity of cell phone cameras and small pocket sized digital cameras has made the capture of such fleeting moments of beauty, wonder, delight, and humor easier than ever before.

I am suddenly saddened as I think about dozens of astounding images in my mind, stored with hazy imprecision from a life-time of paying attention that cannot be shared with anyone else, and become fuzzy even to me.

I particularly wish that I could borrow a TARDIS or some other vehicle of time travel and take a digital camera back to my 22 year old self, standing on the top of a hill in San Mateo, watching the setting sun slide beneath the gray marine layer and for a few brief moments turn the city of San Francisco into sparkling gold sandwiched between a lowering fog and a leaden bay.
Posted by Sue at 6:49 PM 3 comments: Links to this post

Thirty-nine years, six months, and 17 days ago, I left California where I had grown up and moved to Kentucky.  It was January 1975 and California had been green, rainy with roses blooming. Kentucky was cold, dreary and gray. But three months later spring came to Kentucky, and with it the miraculous abundance of green, growing things. 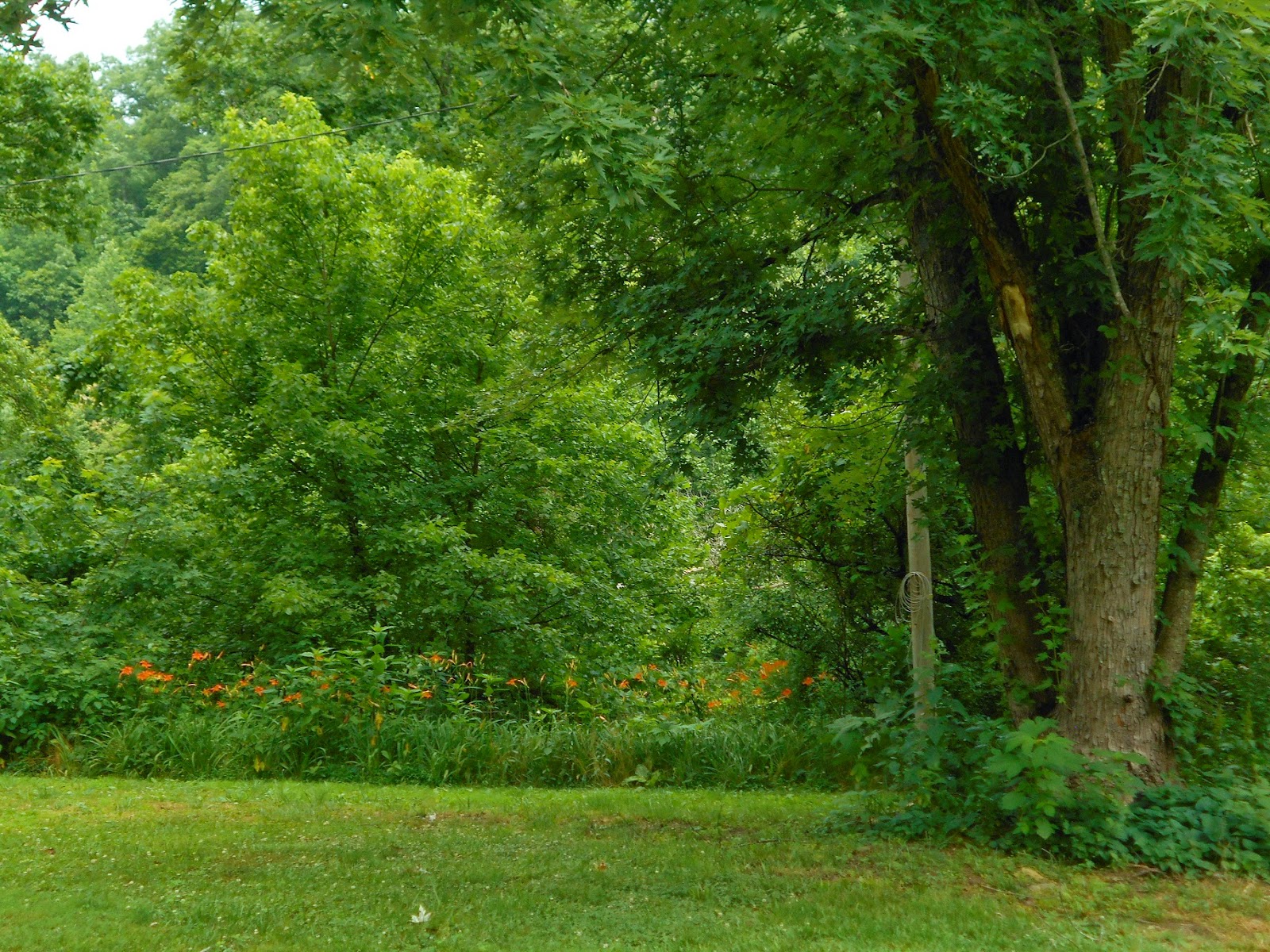 Nearly four decades later (some of which were spent in Pennsylvania and Virginia before I found my way back to Kentucky), and I never cease to be amazed by the exuberance verdancy of eastern woods, forest, fields, roadsides, yards, empty lots, etc.  Indeed any tiny open space in which something might grow, things DO grow.

People who have lived here all their lives do not appreciate how different this is from the western part of the United States. And people who live in the western states fail to realize how different life is when green growing things can actually flourish without attention and even threaten to take over your home and yard without constant vigilance.

Currently the entire state of California is in advanced stages of long term drought - severe, extreme or even exceptional drought. The image below is from May 2013; before the drought these hills would have still been green.  ( http://droughtmonitor.unl.edu/Home/RegionalDroughtMonitor.aspx?west) But even long before the current drought, California was a place where substantial diligence was required to grow things.  For a lawn to grow, a yard had to be carefully seeded and watered regularly every year in perpetuity.  Our Kentucky lawn (pictured at top) was completely dug up last July for a new septic system, the dirt bulldozed back in place, a few grass seeds were scattered, but no other attention was paid - only rain, sunshine and nature operated on the yard. This summer it is as if the construction never took place.

Every spring and summer, we must continually beat back the forest to keep it from swallowing our home. Already the pathway and gate that used to lead from our property to the neighbors has been completely enveloped in new trees and shrubs.  It is both beautiful and awesome in its fecundity.

Posted by Sue at 5:14 PM No comments: Links to this post

In praise of my life and times...

Back in 1991 for a few brief weeks a wonderful little jewel of a television show flashed like a comet briefly across the airwaves and died away into obscurity. Its title was My Life and Times. In the year 2035 an elderly man named Ben tells about episodes in his life (out of sequence) cover moments from the late 1970's to 1999.

The show starred some amazing (at that point quite young) actors including Tom Irwin in the role of Ben, Helen Hunt as Ben's first wife Rebecca, and a glowing, ethereal Claudia Christian as his star-crossed love Jessie.  Only six episodes were aired between April 24, 1991 and May 30, 1991, but those few episodes made a significant imprint in my psyche.

But this post isn't really about the TV show My Life and Times but rather about the wonders of my very own life and times, and how the Internet has transformed my personal experience of my own life.

Yes, the TV show My Life and Times left me with memories, images and themes that have frequently surfaced over the past 23 years...but I could not remember the name of the series itself. Nor did I know the name of the actor who played the title role, although I would never forget his face, and always thought of this series whenever I encountered him in TV and movies. Yesterday, watching a rerun of Castle there he was, that familiar face, and it reminded me again of how I'd loved him as a young man in that short lived series.

I wanted to find out if with all the movies and television shows now on-line was that half-remembered series out there to be seen?  But I didn't know his name, and I didn't know the series name. While I was pondering this problem, I happened to be reading recent posts on Facebook and  noticed that one of my friends had shared something from the page of Claudia Christian. Ah ha! I did remember that Claudia was in the cast (a name that I do remember because of her four years with Babylon 5).

Armed with Claudia Christian's name it was off to IMDb.com the most useful tool for fans of television and movies. A quick scan of Claudia's filmography turned up the name of the series, My Life and Times, which I was surprised to see aired in 1991, some four or five years earlier than I imagined. Click on the link to My Life and Times on IMDb and there were all the other actors names, including Tom Irwin...so nice now to have a name to go with that so very familiar face.

A Google search of the series title lead to some interesting things, including some articles written about the series at the time it aired. Best of all was a post on the blog Television Obscurities http://www.tvobscurities.com/articles/my-life-and-times/#comment-1080674 that provided me with a wealth of information, including the fact that: "My Life and Times was never repeated nor has it ever been made available commercially."
Having already done a quick search of Hulu.com and Netflix.com I suspected that to be so...but there was still Youtube.com to consider.  Sure enough someone named maureenkh1 has collected all six of the broadcast episodes broken into two acts (minus commercials) and shared them for everyone.


And because my life and times include blogs, and embedded video, I can share the first part of the first episode with you all.

When this series aired, in the spring of 1991, the Internet existed, and e-mail existed. But most the tools and resources that I used to aid my failing memory and bring that moment of my past back to life and share it did not.  The time I live in are both marvelous and perilous.

Posted by Sue at 4:43 PM No comments: Links to this post