Southeast Whitesburg Mural--14 Getting it right 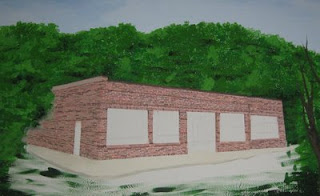 Forbes Whiteside had an exercise that taught students that one has to not only change value (light and dark) but also hue and intensity, to reproduce a three dimensional object. He gave us wooden cubes (about 3"x3"x3"), had us choose a color that we liked and mix up a batch of that one color with which we would paint the entire cube on all sides with the same solid color. When the paint was dry, we set the cube on the table on a neutral colored backdrop. The task was then to paint a picture on our canvas that looked just like our cube did sitting on the table. The most interesting thing about this task was that you almost never got to use any of the original color you used to paint the cube in the first place. The effects of light, shadow, reflected color, and dimension, all required you to use colors lighter and darker (value), bluer/greener/redder (he), and grayer (intensity) than your original color.

It is both the perspective (the lines converging) and the use of color that makes the Allied Health Building appear three dimensional. I finished the bricks today, and will move on to windows and doors this week. 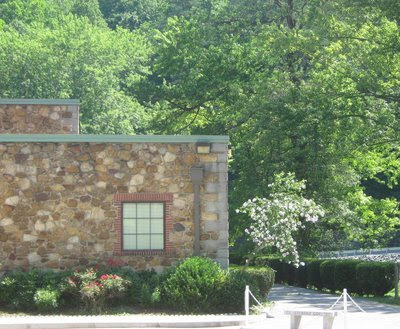 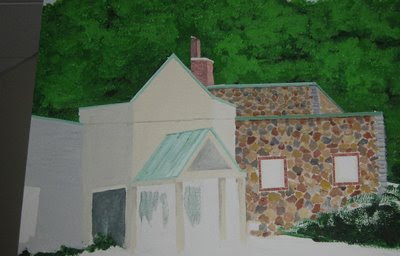 I wasn't sure how the stone work would look until I tried it, and I kept having to get down off the scaffold to get some distance to make sure that what I was doing was creating the right effect. I think it worked pretty well.

Here's the overview of today's work: 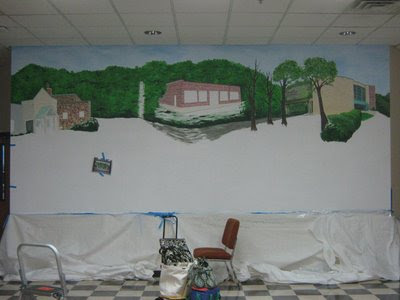 Posted by sgreerpitt at 5:48 PM

Wow! I am really getting an education. The mural looks great!!

Wow! I am really getting an education. The mural looks great!!

I was scrolling down your blog, looking for where I left off and skimmed across the photo and thought "Holy Cow, is she good!" You are, but that was pretty funny. : )