Most of our neighbors have headed out of town. Our nearest neighbors and closest friends, Pam and Mike headed out Friday morning with both their (grown) sons and their sons families for a family reunion in Virginia. So we are taking care of their two doggies and three kitties for a few days. 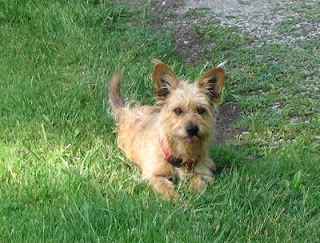 About five years ago, while on vacation they left their dog Dip (aka Dipstick and "the Dipster") at a Kennel, and when they returned the kennel owners convinced them to also bring home with them a homely little mutt that had been abandoned. The scruffy terrier was so ugly he was cute (see photo right), so they named him Fuggly. However, way back then, I misunderstood what they were calling him, so I've been calling him "Tuggles" for five years -- Mr. Tuggles when I'm being formal. I think I like my name better. Fuggly/Tuggles the terrier is constantly finding new places to dig himself out of their yard. They manage to keep him confined for three or four weeks, before he finds a digs a new hole. He likes to come over to visit with me when I get home from work.

Dip on the other hand has always been leery of anyone other than his family, but suddenly this week, he's decided that I might be an okay person. This isn't just about food, because I've fed him before. I guess old age is mellowing him (he's about 10 or 11 years old now).

Even though Dip and Tuggles spend most of their time (from spring through autumn) outdoors, they are used to lots of human company, because Mike and Pam have the most wonderfully relaxing backyard, with fabulous deck, pool, and hot tub, and spend the majority of their non-working hours outdoors with the animals. So in addition to doing the morning and evening feeding, I'm trying to spend an hour or two with the dogs so that they don't get too lonely while their humans are away.

Today I lounged on the deck and got caught up on some reading, while having plenty of opportunity to pet the dogs, and cuddle the cats.
Posted by Sue at 7:40 PM

What a photo! What a cute pop.

I agree, what a cute pup!

PS: Re: cookbook. Thanks for asking. I am sold out of copies of my cookbook, as is Amazon (for new copies). Sometimes a good used copy shows up over at Amazon though, (link below)if you want to check this out. I am hoping to get more copies of my cookbook, sometime in the future. If I do, I will post about it on my blog. I have a lot of people who would like to buy a copy but missed out previously when books were available. I hope in the meantime that you will give some of the recipes a try.

There is a recipe archives over at my Veggies…blog, just click on the sidebar link.