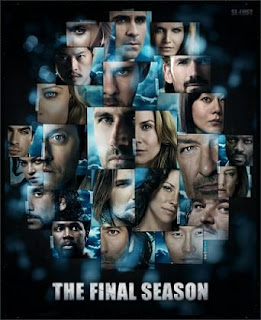 Other than to say that last night's final chapter of LOST has left me with a sense of quiet, peace and satisfaction (Namaste to you too), I'm not quite ready to blog about the final episode yet. I want to dwell in that place of peace and light for a while longer.

However, I did spend a short while this morning reading the blog posts and commentary articles of folks who had similar reactions to the ending of our favorite series. Among the comments on those other blogs and articles I did find one type of posting that I found disturbing.

Several folks commenting, who were unhappy about the way the series ended, complained about being tricked into investing their energy for six years into something that was not "real." These commenters appeared to think that having any portion of what they had viewed for the past six years take place after the characters had died negated the realness of the conflicts the characters faced and the emotions the show stirred in those of us who loved it.

Leaving totally aside for the present issues of 1) when the characters died (at the very beginning or as they appeared to, through out the show and some even after the death of Jack at the very end), or 2) whether or not one believes in purgatory, the guff or even heaven, the aliveness or deadness of the characters has no relationship to how real the issues and conflicts are, and how real the ideas they got us to think about.

So I am left wondering, what makes things "real" to the people who complained about the ending invalidating the reality of the show? How odd to think that one could readily and happily invest energy in a show about time travel and disappearing islands, mythical research projects of the 1970's, smoke monsters, and pockets of electromagnetism great enough to grab airliners out of the sky, and yet the loss of corporeal status is the one thing that makes everything unreal.

Are we humans nothing more than physical beings? I say not. We are spirit, we are hopes and dreams, we are ideas; the "I" or "self" that each of us is encompasses the physical body and physical experience, but transcends it to be so much more (a key idea of one of my sociological idols,George Herbert Mead).

Some believe that such self can also transcend the death of the physical body. But you don't have to believe that to recognize that what makes us human goes far beyond mere matters of physical survival of individual corporeal beings. As humans we create families, communities, societies, nations, cultures, that last far beyond one frail human life-time.
Posted by Sue at 2:34 PM 2 comments: Links to this post

spay or neuter your pet and take in a stray today!! 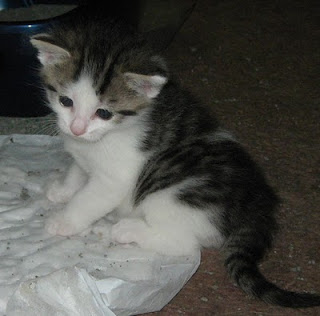 Someone posed a question on one of my posts about Tabitha and the kittens (Tippy, Ty, Eli and Sammi). It was a very good question about why had my cat had kittens, and whether these kittens were going to keep on reproducing. Here's my response:

None of "my" cats have kittens, they are all neutered and spayed at six months or as soon as they come into my home if they are older. Tabitha was a stray that took up residence under my house during the very cold winter (through a hole that has since been blocked). I don't know who her putative owners were, but they were irresponsible, not only for not having her spayed, but also for not providing adequate shelter from winter weather.

For three months she lived under my house and was so scared that the minute the front door opened she disappeared under the house. I never got within 20 feet of her (and had no idea of her gender) from December through March; much less be able to capture her and engage in preventative medical intervention. Then one day, instead of running away she ran to me and rubbed all over me, wanting to be picked up. The reason was obvious -- she was hugely pregnant (nearly 50 days as it turned out).

The only choice (to me) was to take her in, and care for her and the kittens. There are no animal shelters of any kind in our county, and none in the region either public or Humane Society, that take cats. And only one distant one that takes dogs. I resent the fact that other people are not as responsible with their pets as my husband and I are. Eastern Kentucky has a huge cat and dog over-population problem. Not only do strays wander about, but even most cats and many dogs that have "owners" wander around lose, able (and of course willing) to reproduce at will.

There are good responsible people in my county, who not only take care of their own animals, but who also work hard to raise money and awareness. Efforts are underway to raise money to build a shelter in our county, but bad economic times make that difficult. In the meantime the only real alternative is to take care of strays oneself.

The medical care that we will provide for Tabitha and her kittens includes an appointment (made the day that the kittens were born) for Mama Tabitha to be spayed and the kittens to get their first shots. That will happen next week. The kittens will be spayed or neutered in five months time.

The kittens like Tabitha will become part of my household, bringing up to 11 the total cat population. They will have food and shelter, and good veterinary care for the rest of their lives. We had really hoped to allow our cat population to decline through natural attrition (old age). So that by the time I retired we would be catless. But fate sent Tabitha our way, and we could not turn our backs. Nor could we just keep putting out food and providing a sanctuary (under our house) for continued reproduction.

The compensation for acting responsibly is that for the first time in 13 years we get to enjoy the wonder and joy of kittens.
Posted by Sue at 9:20 AM 6 comments: Links to this post

Email ThisBlogThis!Share to TwitterShare to FacebookShare to Pinterest
Labels: cats and dogs, making the world a better place 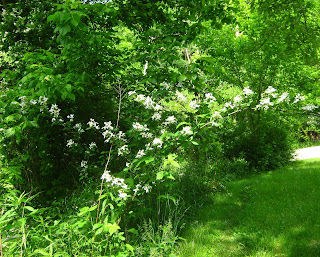 Four weeks ago when I drove to Harlan for a faculty meeting, eastern Kentucky's roadsides were highlighted in the pale violets of redbud, lilac and wisteria. Yesterday, I made the same drive, this time to graduation, and was treated to forty miles of roadsides banked in garlands of fragrant white: blackberries and wild roses. These two climbing vines are found together everywhere, including my yard. (Blackberry vine above and wild roses below). 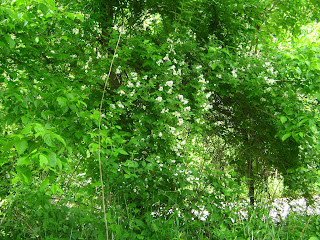 Posted by Sue at 5:17 PM No comments: Links to this post 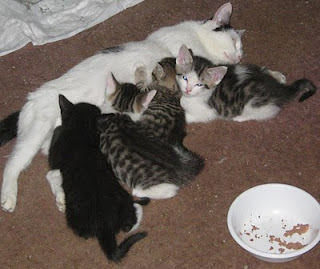 At five and a half weeks, everyone is eating solid food, but still wants to have an afternoon "mom" snack. The line up is Ty, Eli, Sammi, and Tippy looking at the camera. Tippy is the best "bowl" eater so is least interested in chowing down on mom, but still likes to cuddle up for company.
Posted by Sue at 5:01 PM 1 comment: Links to this post 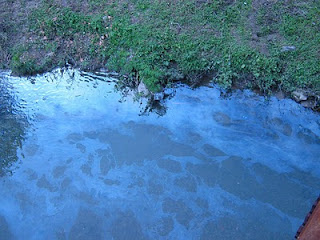 About three PM today, the maintenance and operations staff at Southeast noticed a slick of petroleum product floating down the North Fork of the Kentucky River through Whitesburg. An hour and a half later, I took these photos from the college's walking bridge over the river.

The spill had, by this time begun to collect in thicker pools along the edges of the river. Unfortunately, not far from where this was taken are several groups of ducklings, for the moment still on the bank, but unlikely to stay there.

This is an all too frequent occurance in Whitesburg, KY, where it seems like the water is undrinkable more than 10 times a year. This particular spill will probably be traced to a particular petroleum products wholesaler/retailer in the region. It's happened before and will happen again. Has nothing to do with drilling (whether off shore or on), but to faulty containment and storage in the post production and retail processing end of oil and fuel business.

Unfortunately the ill affects to humans and wildlife are just as bad. Petroleum products creates environmental problems not only in the original procurement, but at all stages in use of the resource.
Posted by Sue at 6:37 PM 3 comments: Links to this post 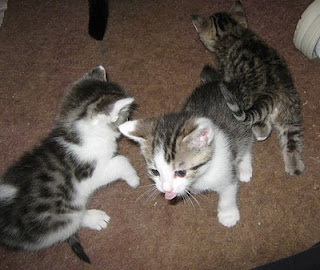 The kittens at four weeks old remind me of nothing less than a mob of tiny drunken sailors running and flopping around. They move amazingly fast despite their wobbliness.

Although we still don't know genders, I've gone ahead and given names that could apply regardless of gender.

Photo to the right is Tippecanoe (Tippy), Elie (with the tongue out), and Sammie walking away. 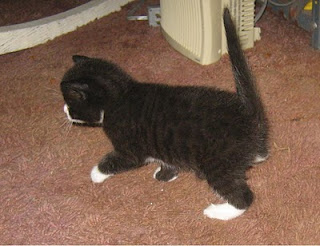 Photo on the left is Tyler Two (Ty) -- the shyest one of the bunch, but well fed!

Below and right are Ty, Sammie and Elie curled up for sleep. 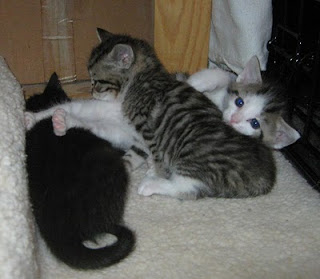