and now for something completely different...

...and if you are a Monty Python fan, you know that what ever follows this line is more of the same and not at all different.

It is shortly before 10 PM, which is very late for me, especially these days when every day requires me to be up in time to give Nino kitty his morning insulin shot. The occasional weekend days of letting John get up to feed cats and dog while I get a couple of extra hours of sleep are gone for the present. I have had some thoughts knocking around in my head for several days, so despite my need for sleep, I'm going to try to capture a few of them and try to pin them down in linear fashion.

We (John and I) have become campaign junkies, turning on the cable morning shows when we get up, and watching the cable prime time shows each night. In between we read stories on the Internet between work tasks. I am filled with both hope and fear. This is I think a moment in our country's history when big changes could actually happen -- changes that could reverse the trends of increasing inequality and a thinning of the middle class; trends that, as a sociologist, I have tracked with concern for three decades. It is also a time when subterranean rifts of race, ethnicity, religion, and culture, could come to the surface in disruptive or even violent ways. 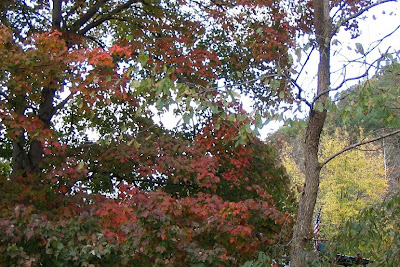 In spite of -- or is it because of -- my preoccupations with matters politic, I find that these last two weeks have been filled with moments of great peace and awe as I drive back and forth to work through our glorious, gold and scarlet autumn mountains. Every October, I have the same thought -- this year is so beautiful, so much more intense and colorful than last year. I think that this is because the human mind is not sufficient to hold on to this glory of nature; of necessity it must fade in our memory to something less than it is. So each year it appears as new and miraculous and more beautiful than ever.

We humans try, through photographs, paintings, poetry and prose to capture the color, the light, the awesome beauty of autumn in the eastern United States. But none of it is quite as rich, as warm, as thrilling as the real thing. How extraordinary it is, that what we humans cannot quite capture or remember fully, nature is able to reproduce exactly, perfectly, with out error year after year.

I think that I am lucky to live here at this moment in time. Seventy or eighty years ago most of these mountains were timbered, and it was decades before the forest grew back. In the present day strip mining is taking more and more of the forest cover, leaving behind bare grassy mounds, that take decades to regain any shrubbery much less trees. Also a century ago, even before the timbering the forest was different, with American elms and chestnut trees, where now maples with their flaming scarlet leaves fading to yellow, deep red oaks, yellow poplars and buckeye dominate. If climate warms and summer lengthens, and winters moderate, perhaps these trees will be succeeded by still others. This would likely change the autumn palette. So I am thankful to be here now, to come around a bend and see rising before me hillsides banked with scarlet, flame and gold.

The politics is important, it matters, but one must keep things in perspective.
Posted by Sue at 9:48 PM 2 comments: Links to this post

A reminder, coming across the electrons:

From the Talmund
"Do not be daunted by the enormity of the world's grief. Do justly, now. Love mercy, now. Walk humbly, now. You are not obligated to complete the work, but neither are you free to abandon it."

Thanks to Brian at HummingBunny for the reminder.
Posted by Sue at 2:40 PM 1 comment: Links to this post

Email ThisBlogThis!Share to TwitterShare to FacebookShare to Pinterest
Labels: faith and practice, Judaism, life, making the world a better place 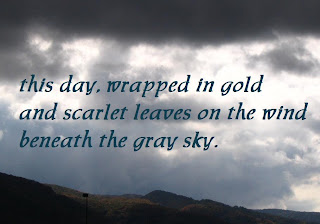 this day, wrapped in gold
and scarlet leaves on the wind
beneath the gray sky. 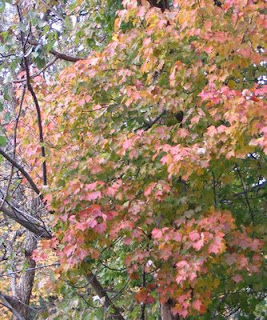 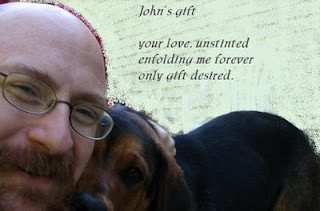 your love, unstinted
enfolding me forever
only gift desired.

For other poems on this same theme see One Single Impression.
Posted by Sue at 12:34 PM 15 comments: Links to this post

Moments of serendipity this week:

Wednesday morning, coming over the rise on U.S. 119 past Kona, just a young male buck with a first year rack stepped out of the shadows of the forest, into the sunlit meadow along the road. I slowed down (from 55 to 40) to get a good look, as did the car who came over the rise next. The buck stood still as a statue for thirty seconds (it seemed like so much longer), then tossed his head, spun around and ran, his white tail flipping, back into the dark of the forest.

This morning, traveling west on U.S. 119 over Pine Mountain on the way to Cumberland, KY, just as I came over the crest of the mountain and had this huge autumn panorama laid out before me, my iPod shuffle hit George Winston's recording of Pachelbel's Canon in D. Perfect moment. I've probably heard two dozen different recordings of the Canon in D over the years, but it never fails to lift my spirits and inspire me. Combined with the extraordinary vista of red and gold forested mountains took my breath away.
Posted by Sue at 5:43 PM 2 comments: Links to this post

Hearts bound by links of gold
grow as one, a living sculpture
carved by the years. 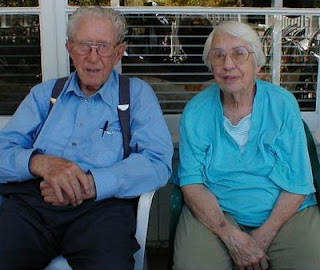 Photo of my mom and dad, photo credit goes to my best friend of 45 years, Betti Christensen.
Posted by Sue at 6:25 PM 17 comments: Links to this post

I've been telling people that I feel like Alice (Through the Looking Glass) when the Red Queen tells Alice "here, you see, it takes all the running you can do, to keep in the same place. If you want to get somewhere else you must run at least twice as fast as that!"

So I decided what the heck, I might as well do something fun. John had a 5K race today, that was, for once, in the afternoon instead of first thing in the morning and quite near by in Wise, Virginia. [We met in Wise, both teaching at what was then called Clinch Valley College). So I went with him. It was interesting to watch the whole process, from registration through the race and then afterwards to the award ceremonies. The participants ranged in age from about 9 or 10 to well over 60. There were lots of middle school and high school kids in their school track uniforms, and lots of middle aged people. The middle aged men and women were seriously warming up for the thirty minutes before race time, while the kids stood around and chatted.

This race was typical, based on what John has told me about other races. The first ones to cross the finish line are usually young men in high school or college, then a mix of middle aged men (John among them) and teens mostly boys with the occasional young woman or two, then the rest of the race is a mixture of ages and genders. It was a 5K, so those of us at the starting point, only really saw them at the beginning and at the end (19+ minutes later). In between I enjoyed talking with some old friends from when I taught in Wise, whose son was one of the high school boys that finished just in front of John. I also saw a few of my former students, among both racers and observers. It was a really nice afternoon. John won his age category (Male 40-44), and brought home yet another small trophy, and the ubiquitous t-shirt.

When we got home, I still had papers to grade, but I felt a lot more refreshed.
Posted by Sue at 9:30 PM 1 comment: Links to this post