Southeast Whitesburg Mural--12 Another Brick in the Wall

Yes, Pink Floyd is playing as a backdrop for this post. 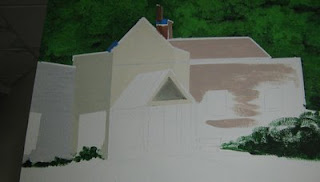 The college was closed today for the Fourth of July holiday, and so I had the whole place to myself. I bought a speaker dock for my iPod, and cranked the volume up. Had to keep reminding myself that a scaffold is no place to start dancing!

On the Administration/Coca-Cola building, I was moving the masking tape around, and laying down different sections of the building. I did several more major areas and then left them to dry while I moved on to add bricks to the Allied Health building.

The Allied Health building was begun a couple of years after I came to work at Southeast (1996). It made partial use of an existing structure (the old Letcher County Public School system bus garage) that had been unused for some time. The building houses several science labs used for Anatomy and Physiology, Biology, Chemistry and the Physical Therapy Assistant program. 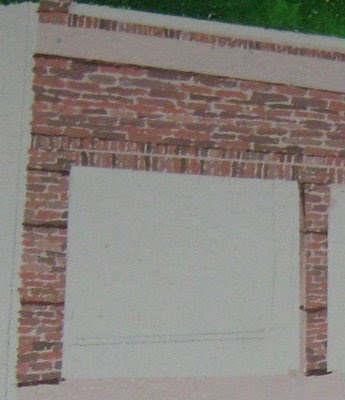 The building is rather plain architecturally, being a single story box. The only really interesting detail is found in the variety of patterns of brick work -- both horizontal and vertical patterns. So I felt that it was important to try to reproduce at least some of that detail.

What you see in the overview picture below took me more five hours to accomplish. The brick details accounted for nearly four hours of that time. I'm less than half way finished with the brick on that building. So I still have lots of fun to come! 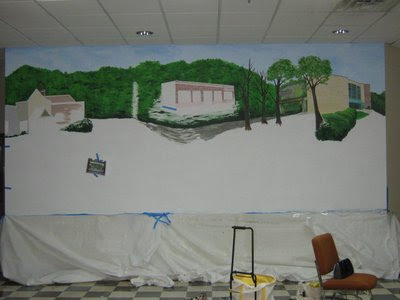 You really made me chuckle out loud with thoughts of dancing on the scaffold. Glad you decided against it, of course.