The scaffolding arrived from the main campus in Cumberland, KY yesterday. Torrential rains and extensive flooding prevented me from making it to campus until today. 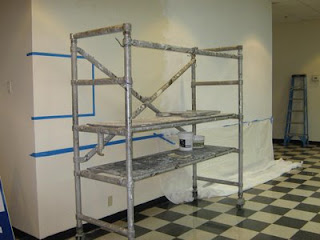 The photo at right gives a good view of the scaffold. When I first arrived on campus at 8:30 this morning, the top platform had been set on the second highest set of rungs, making the platform be just above my head (I'm 5'6") about six feet off the ground. I borrowed an eight foot step ladder from maintenance, and very gingerly crawled up on the platform.

Once on top it was immediately apparent that standing was out of the question. There simply was not enough room to stand -- the platform was at six feet, and the ceiling at ten feet -- even if I had so desired, and believe me I did not desire to stand. With the platform on the second rungs, the safety railing was only 18" above the surface.

Since I was up there, I decided what the h***, grabbed the folded up drop cloth to protect my knees (no more shorts after today!), and proceeded to sand the wall from a kneeling position. After I finished everything within reach, I awkwardly crawled back down with the help of the ladder. Keep in mind, I'm a 265 pound (proud to say down 43 pounds from last October), 58 year old woman with rheumatoid arthritis and extensive osteoarthritis. I'm amazed I got up there at all.

I found someone to help me lower the platform to a more reasonable four feet on the third set of rungs (as in the photo). In the new position, it was easier to get up and down; there was room to stand, and the railing actually worked as a safety railing, being placed exactly at hand level. From that point on it was a simple matter to finish sanding the upper portion of the wall.

Then it was time to get out the gesso. For those non-artists out there, gesso is a type of primer used by artists on canvas, fabric, wood, paneling, even paper. It makes soft, flexible surfaces stiffer, it prevents paints from soaking into a porous surface, and in my case it provides a little more texture (called "tooth" by artists) so the paint will stick better.

I had placed the drop cloth on the floor beneath the scaffold, but discovered right away that was not sufficient. No matter how neat I tried to be, drips persisted in falling on the wall as well as the floor. So my friends Angela and Jerry from maintenance helped hold the drop cloth up while I taped it to the wall. It was not long enough for the whole wall -- I purchased a second one this afternoon for the rest of the wall.

As you can see from the photo below, I gessoed about 55 percent of the mural area this morning. Some folks might say that I also gessoed about 55 percent of myself--as hands, arms, legs (again, no more shorts!), even hair, ended up decorated with white splotches and streaks. [My hair dresser, Todd, was amused when I turned up this afternoon with white streaks in my bangs.] I stopped because I ran out of drop cloth, and out of time (had to get to that hair appointment). 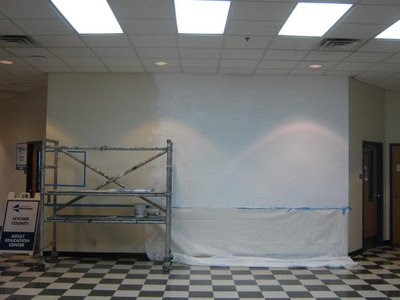 Tomorrow, baring new floods, with new drop cloth in hand, I'll go back and finish coat of gesso.
Posted by sgreerpitt at 3:58 PM

Sue - I see I'll be getting an education while following your progress. Didn't know what gesso was! Very interesting.

I guesso I didn't know about gesso. So interesting, Sue. Good luck with those drop cloths.