music for the folk 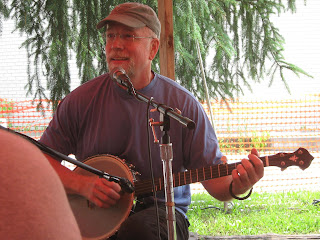 A great place to hear music for the folk (i.e., true folk music) is at the Appalshop in Whitesburg, Kentucky. Appalshop which turns 40 this year, got its start through a program called "Community Film Workshops" from the Office of Economic Opportunity in the 1960's. The local youth involved with the program, turned what was suppose to be a job training program into an indigenous expression of mountain culture, which continues to thrive through music, art, film, and theatre. One of the highlights of the year at Appalshop (for 23 years) has been the Seedtime on the Cumberland festival with live music, films, and crafts.

I've probably missed more years than I've attended since I moved to this region 20 years ago. Some years its just been too darned hot; other years I've been ill, or had too much work to do; some years I just forgot until it was over. But I made a concerted effort to go this year, because one of the featured performers was John McCutcheon; McCutcheon is one of the performers who helped ignite my love of bluegrass and traditional folk music of the Appalachian mountains.

My father is from Appalachia, from the tiny hamlet of Troutdale, over in Grayson County, Virginia. Yet despite this fact, and despite having spent a half dozen summers in Troutdale while growing up, I don't remember ever hearing even one bar of traditional mountain music until I wound up at the University of Kentucky in January 1975.

I don't remember the first time I heard traditional music or bluegrass; as both were ubiquitous in Lexington in the mid-1970's. But, I was already familiar with traditional music by July 7, 1977, when I attended a long standing "Old Time Fiddle" convention in Galax, Virginia while I was working on my master thesis research (an historical/ethnographic study of Troutdale). As part of my thesis research I met and interviewed luthier and musician Albert Hash of Whitetop, Virginia, and I had the rare (for a non-musician) pleasure of listening to Albert jamming with a variety of musicians young and old, behind the scenes at the Fiddle contest in Galax.

So I was already well on the hook by the time the winter of 1977-78 rolled around. The winter of 1977-78 was a long cold one, especially in the coal fields of Kentucky and Virginia where one of the longest strikes in UMWA history was unfolding. A concert was held at the University of Kentucky that winter (if memory serves me right in January 78, but it could have been earlier or later) to raise money for striking miners and their families -- and raise awareness.

My reasons for attending were more political than musical -- at least at first. Two performances of the evening stand out in my memory. I have long since forgotten the names of any of the other acts, but I remember in shining detail both John McCutcheon and the all female Reel World String Band (which also still records and performs--sometimes at the Seedtime festival).

McCutcheon, an instrumentalist par excellence, played several different instruments that winter night, but what I remember, what has stayed with me all these years was his performance on the hammer dulcimer. Despite its ancient and venerable history, I had never encountered the hammer dulcimer before that night. The notes of the hammer dulcimer fall sweetly like spring rain, tripping brightly on the ears. The next week I purchased his album "The Wind that Shakes the Barley" (which was produced by June Apple records of Appalshop!). [I just put it on the turntable to provide the right ambiance]. 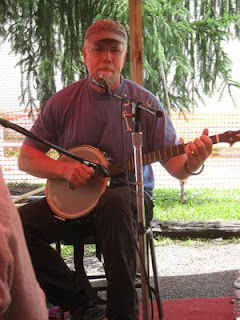 Although it was his performance on the hammer dulcimer that made me a fan in 1977-78, I have since come to appreciate McCutcheon's own formidable song writing skills. This afternoon, he played both traditional pieces and his own compositions, including the "world premier" of a song against strip-mining and mountain top removal that he wrote last night on his way to Whitesburg.

Photo by sgreerpitt, John McCutcheon today, June 13, 2009, at Seedtime on the Cumberland, at the Appalshop in Whitesburg, Kentucky.
Posted by sgreerpitt at 5:47 PM

Now that is a blue grass player! He also inspired my husband when Matt was in his teens. What a pleasure for you to have been able to hear him play. Really neat post, Sue.

This afternoon he told us a wonderful story about how he encountered the traditional music recordings of a Kentucky banjo player while in college in Minnesota, and two weeks later was a college drop out sitting on that banjo players front porch trying to learn how to play just like him. He never went back -- at least not as a student.

Isn't that something? Banjo players are like that; I can totally see Matthew doing the same thing - but he didn't. Still, the banjo is a big passion of his even today.