ruminations on identity as an artist

Today, I decided that perhaps the time has come that I may be willing to claim the label of "artist." Until the last few weeks, I spent my life disavowing that identity. 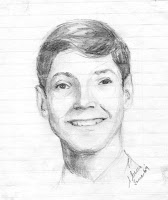 In high school, after one semester in a regular art class, the teacher pulled me and three other students out, placed us in a private studio on our own to paint whatever we wished. I filled my notebooks with sketches (rather than lecture notes) of fellow students that were recognizable and admired by all. Yet when class president, basketball star, and all-around-dream-boat Rob Cooper asked me why on earth I wanted to be a history/social science teacher when I was so talented, I was flattered but adamant that I just simply wasn't an artist. [The drawing to the right, obviously on notebook paper, was not of Rob, but another fellow student.]

My college art instructors assumed that I was an art major. Not an unreasonable assumption given that I took as many hours of art (mostly studio classes but also art history) as I did of sociology. During my senior year I spent more time in the painting studio than I did on all my sociology classes. I painted portraits of everyone I could convince to sit still long enough, some twenty different people over the course of my junior and senior years -- and rewarded their cooperation with the finished portrait. Yet when one friend, spoke to me of a career in art, I responded with the following flip/impatient verse:

Artist?
I never said I was.
You ask to much
of a two-bit scribbler.

One reason that I resisted thinking of my self as an "artist" was that I did not feel responsible for what came from my hands. I looked at things, and moved my pencil or paint brush, and the things I saw appeared on the paper or canvas. This is not to say that I didn't learn many things in art classes. I learned about the tools and techniques of art. What kinds of pencils to use to get certain effects, how to mix paints and select brushes. But most of all I learned how to see things that most people don't see.

My favorite art teacher in college, Forbes Whiteside, was passionate about color. One of his favorite lessons was a slide show of "white" porches that demonstrated that white is rarely white. The time of day, the season of the year, the presence of sun or clouds all change what we see. Most students in his classes were bored to tears after four or five slides. I was one of those students who could watch his slides for hours. Whiteside was exactly the right teacher for me and I was exactly the right student for him. He taught me to paint better human faces by sitting me down in front of a Rembrandt in the Oberlin Art Museum, telling me to look at it and "think translucence." After an hour of sitting in front of that painting, I came back to the studio and had the secret painting of human skin. But I still didn't feel like an "artist."

When the Southeast Whitesburg mural project first came up, I was talking to my husband John about it. I told him that I was probably better for this job than a "real artist." A real artist, I told him, would have specific ideas about how the project should be done, but I would be willing to do what the committee wanted done. John asked what made a "real artist" and why wasn't I one? I told him that while I was technically talented and able to reproduce anything I saw, I was a copyist rather than an artist, I wasn't really "creative;" I lacked "artistic vision."

Well, I've changed my mind. Turns out I had a lot of ideas about how this project should be done, and I was willing to fight for those ideas (and willing to change some details that weren't central to my ideas). My creative vision goes well beyond merely copying the world as it is.
Posted by Sue at 9:57 PM

"I believe there is a reason for the term starving artist- obviously i have this fear of starvation and cannot be one"
has always been my responce to any of thier questions, it makes a joke and they are typically done.
but really i think we are all artists in one way or another.

Sue
Missed you at the HS reunion. Sounds like things are going well for the "artist". Take care
Rich

Richard -- WOW! So great to hear from you. Stop by again some time, keep in touch! Are you in the pictures that Arlene posted?

Yes, I think I was kinda in the background of one her shots. I could not be organized to make it to the picnic, but made it to the dinner deal. It was a lot of fun seeing everyone after all these years.

I went back to look at all the photos, and I did catch a glimpse of you in the background.