demise of an American elm

American elms are hard to find in the U.S. today, as the inroads of Dutch elm disease (introduced to North American in 1928) destroys most trees before they reach maturity -- which can take 60 years. So it was with surprise and some awe that I identified a young (less than 20 year old) American elm at the edge of our property when we first moved in 13 years ago. The tree had the classic "jar" shape, beautifully symmetrical. 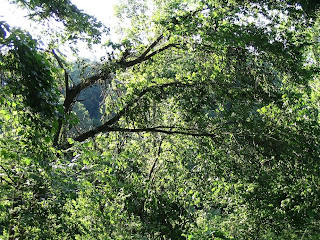 Signs of ill health began to appear in the tree in the last six or seven years. Every major storm cost it a few limbs. In the photo to the left, taken last May, you can see that the tree had become lopsided after losing most of the limbs on one side. I developed a fascination for the tree in the last year, as it presented a dramatic natural focal point for our yard. 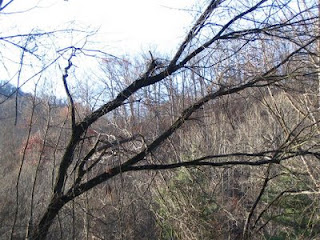 I shot pictures of the elm under a variety of conditions (see right) such as in the late fall, and more recently used the tree as a subject to explore the capabilities, limited though they may be, of Microsoft paint. (See below) 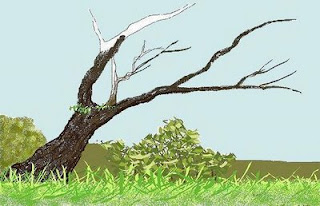 Yesterday, an unexpected, unpredicted storm with violent winds, lightening, thunder, and hail swept through our area between five and six PM. Just as the storm was slacking off, we heard this horrendous cracking sound which seemed to go on and on, and watched dumbfounded as the limbs of the elm slowly fell over. Below is the tree with one remaining upright limb as it appears this afternoon. Luckily, the downed limbs did not block the narrow lane that seven families must use to come and go from our holler. But since the next big wind might change that, we will have to borrow a chain saw and lay the twisted branches to rest. 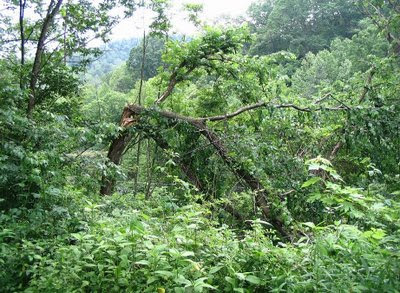 Posted by sgreerpitt at 5:05 PM

i love trees in general, there is something sad about thier death- even if necessary, it hurts something in me, your painting was lovely.

A fully mature elm is such a wonderful tree, it's such a shame that we've lost so many!

Great work, Sue.
I have a large weeping birch in my backyard that is slowly dying to the bronze borer beetle...she gets injections each year, so she's still strong, but each year a big limb dies off...but most of the younger trees around this area are all dead from the beetle. So I know how you feel. It feels like a friend has succombed.

Thank you for the honoring of your tree. They are important to us in ways we can't understand.