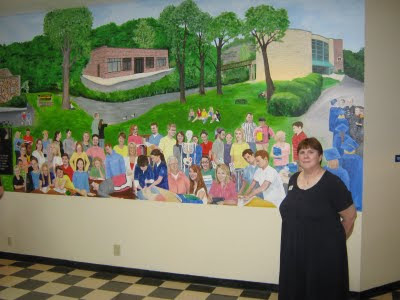 Today was the day, the big 20th anniversary celebration and the unveiling of the plaques, the naming of the buildings, the thanking of the donors, and the honoring of the honorees.

Although it was not in the program, the college's president Dr. W. Bruce Ayers asked me to come up and speak. I've known the man for 13 years, and know he likes to do things like that so I'd given at least a few minutes this morning to think about what I might like to say to people, but mostly I spoke what came to me in the moment. I don't entirely remember what I said, but it evidently hit just the right tone, because people kept commenting on it.

There were lots of great moments as people spoke with great emotion about their passion for the college. Our campus exists because a group of dedicated and visionary local people managed to raise a million dollars in donations and pledges in less than one week. Penny Ritter Combs one of stalwarts of this visionary group described clambering up on strip-jobs to get donations from coal companies during that week. The plaque below is a special tribute Penny and her parents Judge James M and Atha Caudill who not only dreamed of a college, but who have continued to work for twenty years to make that dream an on-going reality. 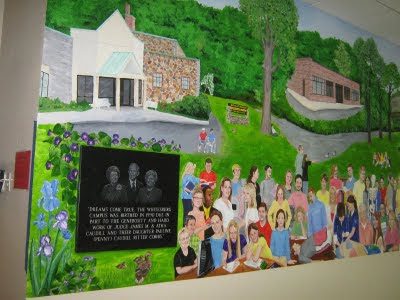 My favorite moment in the ceremony came when a former student of mine, Melanie Watts sang the song "Anyway." Melanie has an extraordinary voice, pure and rich, but she clearly felt this song deeply which made her performance deeply moving. I'd never heard it before, but I can tell you before this day is out I'm going to have a copy of Martina McBride's performance of "Anyway" on my iPod! [The link is to YOUTube video of the McBride performing the song]. The key refrain and guiding idea of the song comes from a poem often attributed to Mother Teresa (because it was inscribed on a wall of Mother Teresa's children's home in Calcutta), but is actually credited to Kent M. Keith and called The Paradoxical Commandments.

So here is the whole thing, finished, with the plaque in place: 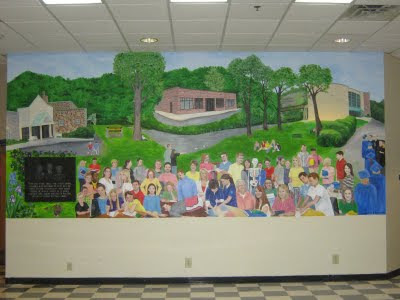 The top photo, while taken with my camera was shot by my colleague Ron Brunty, so I could be in the shot. The other photos are by me.
Posted by sgreerpitt at 4:31 PM

Sue this touched my heart! What a wonderful piece of art, and the song just made me cry tears of joy, and hope for a better tomorrow.

Oh, happy am I and bless to know a person such as yourself. Yes, I may have problems believing sometimes, but I pray anyway! I dream anyway!

Thank you so very much for sharing yourself with all of us!

Thanks for posting the story to the official unveiling etc. It was wonderful to see the entire put the cap on everything. Congrats to you!

Congrats Sue! It's amazing! To sit here and look through your posts...to see what started as little pencil sketches...it's just...WOW!

You are a woman of so many talents - thank you for sharing some of them with me!

Ooh, it looks so nice! I am so happy it is done. And so proud of you. You are so talented and I'm so happy to know you! It sounds like a very special day for the campus. I know students are going to enjoy looking at that mural for years to come!

Left you something HERE, and talked about you too .. hope you don't mind.

That is surely a beautiful piece of art to show off to all who pass by. I love the song "anyway". Beautiful with meaning! Glad to meet you Sue. I came by way Amias's blog. Tammy

I'm very happy to visit your blog today! Congratulations to you on this beautiful creation :) Amazing!

A great job, Sue. Not many of us get to leave a piece of art behind. You, with so many brains and all that talent!

Many heartfelt congratulations to you, Sue! It was wonderful to follow this project all the way to the wonderful completion.