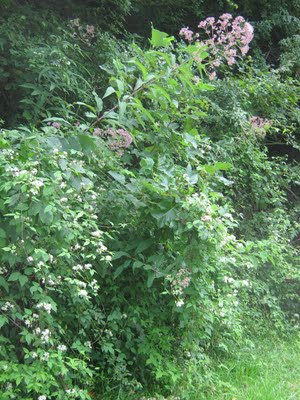 Our yard is encompassed with a bounty of wildflowers, shrubs and trees, with many treasures. Right is Virgin's Bower Vine (the white flowers) and Joe Pye Weed (the tall dusty violet headed stalks). But I had not been out to enjoy it much in the past month.

Between persistent rains, floods, flood clean up and John breaking three ribs a few weeks ago, our yard had gone unmown for at least four and maybe five weeks. John's ribs still are not up to tackling that kind of job. I managed to mow the small area inside our fence a week ago before my back gave out, but even that had grown back. We were getting depressed about the state of things. 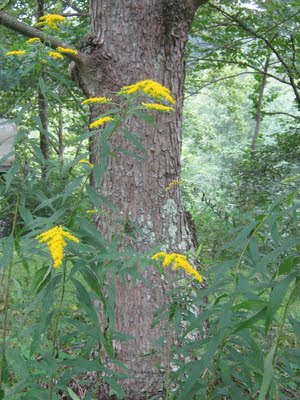 Thursday I happened to run into a friend I hadn't seen for a while, and heard that her son was trying to earn money for college with odd jobs, but hadn't had much luck lately. We called Evan Friday morning, and by dinner time Friday, our yard was once again a pleasant place to spend time. That is, as long as one avoids the mud-plain left behind by the flood. (The coal company's workers fixed the driveways very nicely, but they just sprinked grass seed and straw on the mud).

I suspect Evan thought we were a little nuts, but he dutifully left the six foot radius circles of undisturbed growth around our big maples, where such late sumemr delights as goldenrod (above left) reside. 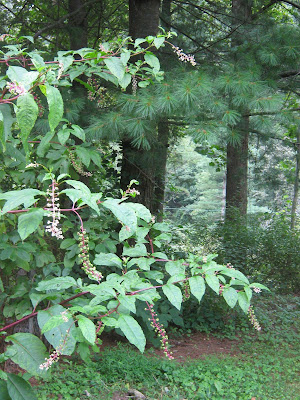 Along the fence we share with the Johnson's are not yet ripe pokeberries or pokeweed (below right) whose dark purple berries are a favorite with the birds. Over the last decade we've gone from one spindly plant to a small forest of pokeweed due to leaving them undisturbed and letting nature (and bird digestion) do its thing.
Posted by sgreerpitt at 2:08 PM

Sue, you were right about the other song, Fly Little White Dove, by the Bells, it was very similar in feeling to the Melanie song, and was a hit only a couple of years after Woodstock. Good memory! http://www.youtube.com/watch?v=IFSMXPmeX8s

And the rain has done your yard good, lovely flowers!

Oh, thanks for straightening me out, I thought you meant a different song (not thinking of the lyrics to the Melanie one-duh!)

Your flowers are gorgeous. You have been busy. I am glad you had time to share these with us.