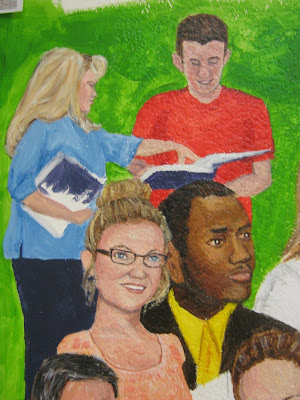 This was the first time I've painted when all the students were on campus, coming and going from class. I deliberately put on big headphones (rather than just ear buds) so that people could see I was listening to music, and that cut down on the number of people asking me questions and talking to me. It was still a little weird to have a constant audience of dozens of students who were clearly observing me and talking about the portraits on the wall. Glad I didn't have that big an audience all summer.

There is one group of small figures to be added above these, but these are the last of the main faces/figures for the mural.

Looking back on it, I would have packed the faces/figures more closely in the first part of the mural. Especially if I had any idea that I would be besieged by student requests to be painting in the mural. It never occurred to me that students would come by and actually ask to be included. Of course if I had done that I would not be any where near as far along, and as much as I love this, it is becoming clear to me that it would be very hard to spend more than one or two days a week painting and still teach all my classes. 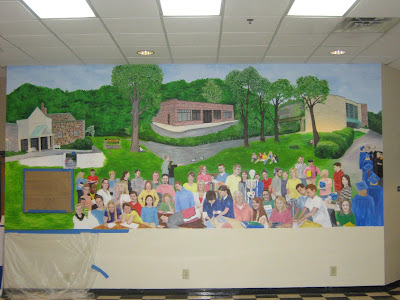 Posted by sgreerpitt at 4:11 PM

You mean you didn't get a 'course' (or two) release for doing all of this!
Seriously, this turned out sooooooo nice and pretty. If I were a student there I would have wanted to be on your mural for sure.
I am proud of you! Congratulations.
..
Having said that, I also know the mechanics of getting up onto and working from those ladders was a terribly hard thing for you to do, especially with regularity.
Thank you for showing us the finished product.
..
Would you do another? You don't need to answer, I think I know.
You would.
..

wow sue, i saw the product yesterday and it was fantastic. my classes are tues and thurs, 8am to 3pm, i kept hoping to bump into you and to tell you in person, but i couldn't hold back any longer, it is really great. i do murals in my kids rooms and it is very hard work, you tend to throw yourself into it and lose reality. i'd wear headphones too!

Look what you've made! So wonderful! Really really proud! : )

I haven't been able to comment in excess because I am still looking at it.

However, you did an amazing job, very good attention to details ... and there is a feeling of life in this Mural --- in other words it looks alive, if you know what I mean.