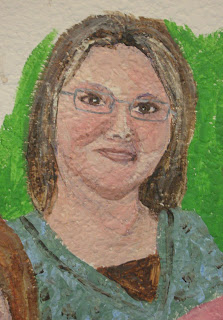 Today I wanted to feature a couple of faces -- faces of friends and colleagues who also happen to be graduates of the college. First up is Debby Young. Debby came to Southeast about 11 years ago, to handle the financial transactions of our campus. She deals both with accounts receivable and accounts payable. In addition to her full-time job with the college, Debby is a wife and mother of two lovely young women, who have grown up over the past decade. During her time at Southeast she has completed an Associates degree from the college, and then by combining various forms of distance learning and some travel has completed first a bachelors degree and then a masters degree both in business. She now teaches several business courses for the college. Whew! I get tired just thinking of all the things Debby does. 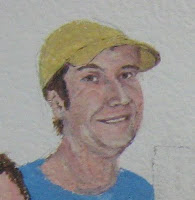 The smiling guy to the left is Jerry Hensley. Jerry is one of the hardest working men I've ever met, and is never without his hat! It's not unusual to find him at the college on the weekend finishing up some project that was not completed during the week. Jerry's wife and kids must be very tolerant of his commitment to the college. Jerry has the most seniority of our Whitesburg maintenance staff, and has been with the college many more years than I have. Jerry completed his associates degree at the college and took courses from both me and my husband John.

The next two weeks promise to be very busy with things other than painting, and I wanted to get finished with all the people currently sketched in before I had to stop for a day or two. So I took advantage of the empty campus today to put in another five hours of painting, and got five more faces completed today (including Jerry's). See below: 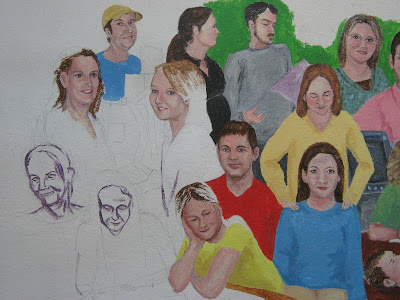 Posted by sgreerpitt at 5:59 PM

I love the warmth and depth that comes from each face that you paint. That is truly a gift, to be able to capture this.