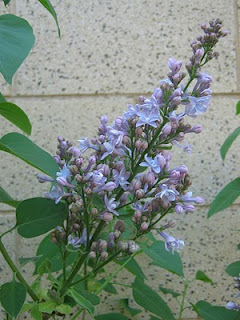 There is nothing so wonderful as the smell of lilacs. I'd only read about lilacs until I was 19 years old and a freshman in college. Lilacs require cold, snowy winters to flourish and bloom, so they just won't grow in coastal California -- my mother tried repeatedly, but was never successful in her attempts to produce lilacs.

At Oberlin College, behind the Conservatory of Music, hedge of lilacs that was more than 8 feet tall and 50 feet long; bountiful enough to allow a fragrance hungry freshman to purloin a few sprigs to perfume her dorm room.

In television series '30-something' (from the 1980's), there was an episode in which 'Elliot' was trying to win back his estranged wife 'Nancy' and filled the whole house with dozens of lilacs boughs. That certainly would have won me over.

Our long, snowy winter produced more than the usual supply of spring lilacs through out eastern Kentucky. The bushes are heavy with fragrant blooms. The ones in this photo are on the Southeast Whitesburg campus planted within the last two years, and this is the first year that they have had blooms.

(Under the Lilacs is one of Louisa May Alcott's lesser known children's novels).
Posted by sgreerpitt at 3:33 PM

I Loooovvvvvve Lilacs! I accidentally ended up at the Lilac festival in Rochester one May and heve always wanted to go back. : )

I love lilacs too. We had two beautiful lilac trees in our yard, when I was a child. The glorious scent returns, reading this post. Thank you!