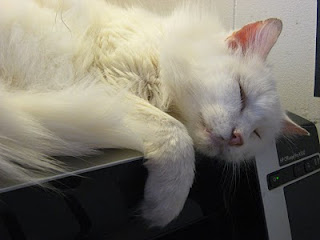 James Tyler Cat died early this morning, twenty-four days shy of his 13 birthday. He was born on my front porch on March 27, 1997, with two female siblings who preceded him in death. March 27 is my mother's birthday, so one of the female cats was named Josie T. after her, and James Tyler was named after her father, brother, cousin, and cousin's son -- four generations of James Tyler Crittendens.

James was a very large, pure white, long haired cat with a sweet and gentle disposition. He will be much missed.
Posted by Sue at 6:10 PM

James Tyler is the image of my precious Duke who passed 10/30/01. He was 17. This photo broke my heart because of the similarity of them.
Our furbabies are our companions & I know, with me, I never got over the loss.
My thoughts & prayers are with you in coping with this personal loss of your friend.....
Love,
Marilyn
xxoo

Sue, i am so sorry. I know how much you love them all and how hard it is to deal with the loss. I love that you have these wonderful photos of all your sweet friends.

Thank you, Marilyn and Joy.

Hi, Sue. I was thinking back to those years at CVC and found your blog today. I admire and commend your literary and artistic creativity at your blogs.

My own cat Pau, an orange tabby not dissimilar to Tigger, whom you published a photo of, died in January. He had been getting thinner, and his appetite was flagging, but I just put this down to aging - he was almost fifteen.

However, when he stopped eating we took him to the vet. Blood tests and ultrasound imaging narrowed the diagnosis to a massive intestinal infection and/or cancer (probably metastasizing from the liver) - in either case terminal. A definitive diagnosis would have required surgery, and there was no realistic possibility of a full recovery, so we ruled that out. We had him put to sleep and buried him in the back yard, near where he spent many happy hours sitting and enjoying nature.

We loved him very much, and vice versa, and in some way he will always be with us. Fortunately we still have our other cat Dinah. I admired his authenticity and engagement with life, and strove to live up to his unconditional trust. I am resolved not to let his loss harden into a stone of sorrow in my life. As Kurt Vonnegut put it in Sirens of Titan, "A purpose of human life, no matter who is controlling it, is to love whoever is around to be loved."

Verses from the original rap rhyme, "It a Great Life [always look on the bright side]" from which the following was modified, can be found at

Groove with the rhythm, bopping down the block
move his paws and tail as he go hip-hop

Purr at the neighbor, purr at the sky
Life is a blessing - why ask why

Count all your blessings - let go of strife
This is your Pau - treasure his life.

Oh, I am so sorry to read this. I wish the dear James a safe journey to the other side.