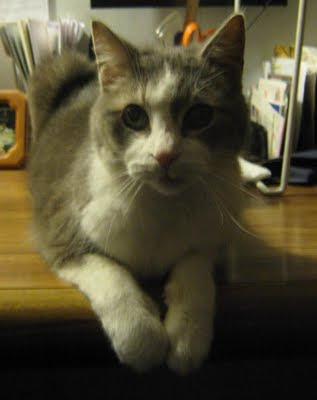 Here's my kitty Buford Jacob -- originally named (by me) B.J. after a character on "General Hospital" that died in a heartrending story about that time. My husband who started dating me the very same weekend (July 4th 1994) that tiny, lost kitty Buford wandered onto my back patio, said that every cat deserved to have a real name instead of just initials. So B.J. became Buford Jacob. He's getting a little long in the tooth (what teeth he has left), but is still one of the sweetest natured kitties I've every had. He likes to occupy my desk where he can reach out and pat me, and get lots of pats in return.

Update December 14, 2009
At Bufford's annual vet visit today, the vet was alarmed to note that he had lost four pounds in just six months (since he had dental work in June). Today's blood tests were all mostly normal, so the cause is still a mystery. Something new to worry about.
Posted by sgreerpitt at 5:30 PM

Email ThisBlogThis!Share to TwitterShare to FacebookShare to Pinterest
Labels: cats and dogs, family

Good name.
I remember that story, but haven't watched GH in years.

Good name.
I remember that story, but haven't watched GH in years.

Your kitty is adorable and reminds me of a cat from my childhood. Love the way you found a name. Ms. Kitty really doesn't have one though she's been with me for MANY years and is about 20 years old.
Hugs and blessings,

One can tell that this is a really sweet kitty. I love his name.

Bufford is a good looking fellow. I hope everything will be alright. Love his name too!