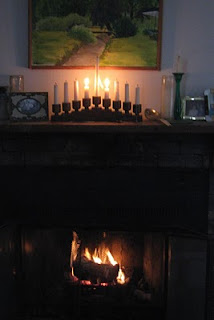 100 hours (4 days and 4 hours) after the power went out, it came back on -- noon today. The water is still not back to full power, but at least there is something coming out of the tap. [The water company's pumps went silent due to the power outage.]

We were very, very lucky. We were able to stay warm and comfortable in our own home, and did not have to seek shelter elsewhere. We would not have wanted to leave all our furry children. Between a nice fireplace and a modern kerosene heater, we were able to keep the central rooms -- family room, living room and kitchen -- around 62 to 63 degrees (warmer right next to the heater), which is not much cooler than we keep them when we do have electricity. 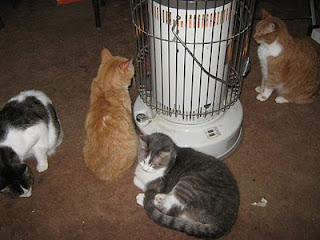 We bought the kerosene heater after two day power outage in our first winter in the house -- thirteen years ago. We never used it, as we've had no winter power outages that lasted more than a few hours in the intervening years. But once new batteries were installed and it was filled with fresh kerosene it worked perfectly. I still have it going to help ease the furnace's load in warming up the whole house. Besides the kitties love the warm glow!

Because John has done a lot of backpacking in previous years, we were well equipped with two propane burners and a number of unexpended propane containers. 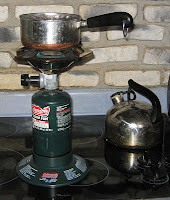 Plus we had freeze dried trail food packages to cook on them, as well as plenty of easily heat-able canned foods. Piling bags of ice that we had in the freezer into the refrigerator instead allowed us to keep the small amount of fresh foods (eggs, milk, cheese and juice) safely cool -- more important than a vain attempt to keep the pizza and ice cream frozen.

Because of the unreliable quality (many boil water notices) and poor taste of our municipal water, we have drinking water delivered in reused five gallon bottles every three weeks, and our last delivery was less than a week ago, so we had plenty of water for drinking, cooking, and even a little washing.

We had our battery run radio --although the number of stations one can receive in our holler is limited -- to inform and entertain us, and our LED head lamps for reading, and most of all we had each other to talk to, discuss the news of the day, tell jokes and stories.

We were both very lucky in our circumstances during the outage and we are very lucky now, because our electricity is back and tens of thousands of people in the region are still without power, especially in neighboring Virginia. Our thoughts go out to all those still struggling.
Posted by sgreerpitt at 1:31 PM

Wow. Glad you made it. It sounds like you were pretty darn well prepared. I think I need to check on my household... Thanks.

It absolutely amazes me when people don't realize how much we can really live without certain amenities. I don't LIKE not having power or water BUT I can live WITHOUT them. Imagine if the world turned off power for a day and we had to live a bit more primitively how that could affect the carbon footprint. I couldn't imagine.

Del
, My spouse and I absolutely love your blog and find most of your post's to be just what I'm looking for. Does one offer guest writers to write content for you? I wouldn't mind creating a post or elaborating on a few of the subjects you write concerning here. Again, awesome website!
,check my design [url=http://www.oriondesignhomes.com/punbb/punbb-1.3.4/profile.php?id=177398
]discount wedding party dresses[/url]