On June 1, I posted about the omnipresent sound of the cicada in our region. Both Letcher County, KY and Wise County, VA, have been filled with the low whirring sound of cicadas, something like the whine of high voltage lines -- only louder!

Today, in the Virginia side of the line, not only where the cicadas making plenty of noise, but they were also flying. My car was repeatedly bombarded during the 15 mile drive from the border. While I was in the grocery store, I left the windows on the car partially down, because it was so miserably hot (92 degrees at least). One flew inside and settled in the back with the groceries. I didn't discover it until I got home. It was my first up close view of these insects.

Did some surfing on the Internet and found lots of really interesting facts!

There are several species of cicada -- multiple species of 17 year cicadas and at least two species of 13 year cicadas. All the cicadas that emerge in a particular year (as part of their 17 or 13 year cycle) are referred to as a "brood." The brood that has emerged this year (spring 2008) is Brood XIV (14). This years brood is made up of three species of cicada: Magicicada septendecim, Magicicada cassini, and Magicicada septendecula. The College of Mount Saint Joseph in Ohio has a terrific web page maintained by Dr. Gene Kritsky that includes a map of the location of Brook XIV. Maps for fifteen different cicada broods can be found at the Great Lakes Cicada Page. The one below is for Brood XIV, that emerged this spring. 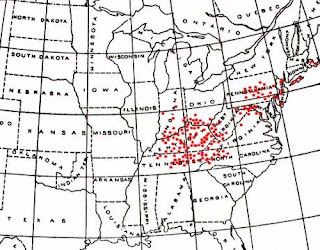 The identification and naming of cicada broods began in 1893 by Charles Marlatt, an entomologist working for the Department of Agriculture. He labeled the brood that emerged that year as Brood I, and the Brood that emerged in 1894 as Brood II and so forth.

Right about now, mid-June is when the cicadas that emerged this year begin to die off, having reproduced and deposited their eggs in the trees. So far, however, I haven't seen any thing on the internet that discusses the sudden commencement of flying behavior. Obviously the critters got wings, so must be intended to be able to fly, but none of the websites mention flying specifically. My primary curiousity is why they suddenly seem to be flying now, all at once (and crashing into cars and trucks)!
Posted by Sue at 7:06 PM