Things I wish I'd known three months ago 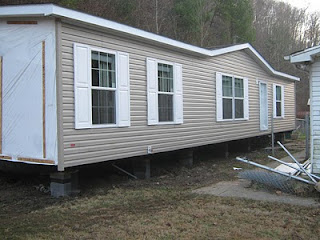 We made the decision to buy a new manufactured house to put on our property in late August or early September. The existing house, also a manufactured double-wide, was installed (incorrectly) thirty-one years ago, and to make a long story somewhat shorter is simply falling apart in a way that is not reasonable to repair.  Moreover, the way it was installed (big raw hole dug in the ground and house plopped down in it), makes it impossible to put another manufactured home on the same site.
So we spent some time walking around the property and decided on a good location for to put a new house and armed with the dimensions of that space started shopping around.
Two things I wish we'd known then that we know now is: One, our electrical utility American Electric Power/Kentucky Power has a 100 foot right-of-way around their overhead high power transmission lines (50 feet on either side of the center line), and so even though the lines are more than 30 feet above the valley running from mountain top to mountain top, the power company's right away takes a huge slice out of one end of our property -- the end where we wanted to put the new house.  After a couple of weeks of uncertainty we ultimately found a new place to locate the house, but had we known about the power company's right of way before we started we might have chosen a smaller, or at least differently configured house. The second thing I wish I'd known was that the costs of financing the loan (origination fees, title searches, points, etc.) would be more than $9000 above the cost of the house itself; that knowledge definitely would have lead to choosing a smaller, less expensive house.
By the time we'd learned both these things the house we had decided on had already been ordered, and although we were not legally bound to purchase it, we felt moral and ethical obligations, plus, by this time we really liked the house we'd chosen.
Those are the two biggies, but there are many, many smaller things I wish I'd known.  I wish I'd known that everything always takes longer than everyone says they will, and that once winter weather sets in all bets are off on the timing of construction activity. Of course we thought, three months ago, that we'd be in our new house before Thanksgiving. That was before the power company right-of-way debacle.
I wish I'd been given a complete and clearly detailed list of all the various tasks that would have to be done, that indicated for each item whether this was something we had to hire workers/contractors ourselves and pay for ourselves or something for which the home seller was responsible. I learned that "oh we'll help you take care of that" means that we're really responsible, and that all the seller is providing is names and phone numbers. But most of all I wish I'd known that just because the manufactured housing company recommends workers (like electricians) doesn't mean that they actually know what they are doing -- we failed electrical inspection the first time around, so more delays. We learned that when people focus too much on trying to "save you money" they can make stupid and costly mistakes.
I wish I'd known about all the different types of inspections, and that you had to pay the inspectors; and I wish that I had known which inspectors were perfunctory and which picky about details. I wish I'd known the level of detail you are suppose to know about your septic system  -- and the artistic skill required to draw the map free hand -- before trying to get health department approval.
I wish some one had spelled out for me the exact time sequence that things have to be done in -- I'm still not clear about the necessary order for electrical hook up and septic hook-up, and just hope that the timing comes out right.
I wish I'd known how small a load 4 tons of gravel really was, and how far (not very) it would go. I would have opted for a larger load.
I've been thinking that someone, maybe me, should write down all the things to expect; but then I wonder how generalizable to others situations are the things I've learned?
Posted by sgreerpitt at 3:34 PM

Its a lovely home though......
I'd go mad at all the delays but then I wasn't ever very patient.
I really hope things get moving in the way you want.
Maggie X

Sorry to hear all of this. I wish I knew lots of things too and I learned that I am not very patient either.