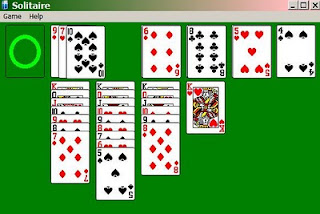 This morning, as I often do while waiting for all my programs to load first thing in the morning, I play some games of solitaire, rather than just sit there and stare at the screen. Suddenly I was struck by the idea that there were important life lessons to be learned from computer solitaire.
It occurs to me that the last one applies to the current political scene.  Principles are important, and we shouldn't give up on them. As much as it goes against principle, maybe it is the right thing to make concessions in one area (temporary extension of tax cuts for the rich) and lose some points, in order to advance a larger agenda - tax cuts for the middle and working classes.

Of course one more important lesson from solitaire is:

Posted by sgreerpitt at 9:48 AM

I also play solitaire on computer while waiting for things to load, or when I need a break from other thinking.

I love your lessons, and of course know exactly what you mean!