weather is not climate, but.... 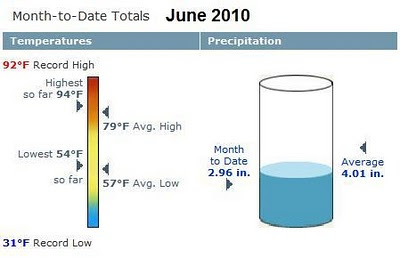 The Weather Channel's website has a number of nifty new features. One of which provides you with lots of information about how your current month (and previous month) stack up against historical weather patterns. I've captured the screen shots for my zip code 41825, for June 2010 and July 2010. 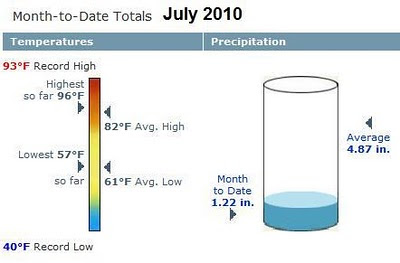 Notice that for both June and July the "highest temperature recorded so far" is higher than the historical record for that month -- so we broke the all time temperature records for both June and July in Eastern Kentucky. Notice also that the total rain fall amounts for both June and July are well below the average. June's precipitation total was 1.05" below the average. Of course July isn't over yet, but let's hope we don't get 3.65" of rain in one week. While the July total rain is more than three and a half inches below normal, eastern Kentucky did get one whale of a gully-washer, to the great dismay and anguish of hundreds of folks in Pike county.


While it is important to remember that weather is not the same as climate, and unusually hot days occur periodically, as do droughts and floods, overall warming of the climate as is currently occurring on planet earth, does give rise to more frequent extreme heat, more common droughts, and paradoxically more frequent intense rain events like that seen in Pike County this month.
Posted by sgreerpitt at 3:30 PM