If you don't like all this snow, join the fight against climate change! 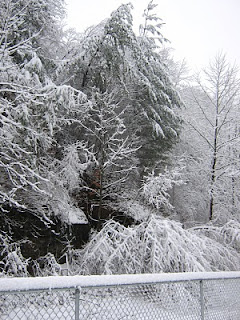 An "increase in average precipitation in winter" means more snow!

Look at all the problems created by the snow storms in the U.S. this winter. Transportation systems disrupted. Power systems disrupted with millions of people losing electricity. Lost revenue to retailers and other businesses. Schools closed, government services disrupted. This is exactly why climate scientists have been warning about global climate change. When climate scientists say that not fighting climate change is going to cost us more in the long run than making changes to our economy, energy and economy now, this extremely snowy winter is part of what they are talking about. Among the other things they are talking about it is more frequent, more drastic alternating periods of drought and heavy rains in the other seasons.

People who want our government and economy to take steps to reduce the extremes of climate change (stopping it altogether is not possible), want to prevent even more extreme disruptions of society than we are currently dealing with this winter.
Posted by sgreerpitt at 3:36 PM

We are having the exact opposite weather, here in BC. Dry as a bone and frightening too. Id love to see some snow, even blogged about it this morning but it's not expected. People are often so complacent about the changes in the weather, that's frightening too. Good wake-up call here Sue.

excellent point, Geraldine. People so often forget that theirs is not the only weather in the world, and that its "global" climate change.