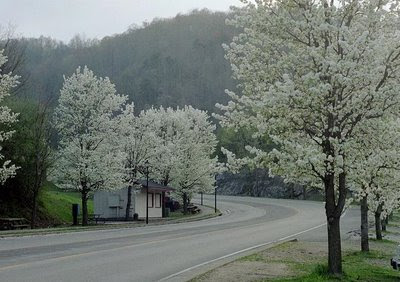 
The phrase "tremulous white," has been reverberating in my mind for the past two weeks as I observe all the ornamental pear trees around the area dressed in their spring finery. The phrase originally comes from the poem "There Will Come Soft Rains" by Sara Teasdale dealing with the return of spring to the battle fields of World War I and it referred to the blossoms of wild plum trees.

The title of Teasdale's poem (and several verses from it) were borrowed by Ray Bradbury for a short story also entitled "There will Come Soft Rains" about the return of spring after a devastating nuclear war in the future. I was an avid science fiction reader as a child, and Bradbury's story led me to Sara Teasdale, who quickly became my favorite poet during my teenage years.

The phrase "tremulous clouds" is very commonly used by various writers over the past 150 years (including Harriet Beecher Stowe) and is most often associated with dark, stormy clouds that show a great deal of movement and churning.

I imagine the scent of those trees at their peak must be almost dizzying!