The kernel of the idea for this poem emerged in September 1988, twenty years ago, but new experiences, new imagines, new rhythms have resulted in a new poem for the prompt "Fleeting."

Deepest rose: a leaf, a branch, a single tree 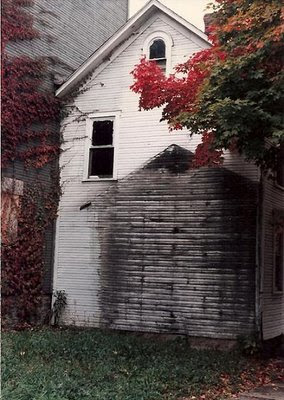 flaunts its flame within the green,
a day, a week, then fades to golden brown.

Fragile joy: a face, a smile, a warming voice,
the touch of hearts within the crowd,
drawn on to different fates.

For other poets' poems on the same topic, see One Single Impression for September 28, 2008.

The photo entitled "ghost house" taken by me in early fall 1988, from the Moxham neighborhood of Johnstown on Grove Avenue.
Posted by sgreerpitt at 5:25 PM

Sue,
Your poem is beautiful. Each moment, one could take for granted. I love 'flame within the green'. Thank you!

Your ghost house is perfect for your 'fleeting' poem.

Beautifully done. It is so important to capture such moments before they are gone.

I like your poems, and that is a FANTASTIC photo! Wow!

Your poem goes right to the heart of the matter! And it's so well-paired with that amazing photo!

..in the context of the poem the caption 'ghost house' acquires new meaning.the image reflects the application of a painter's mind._
the lines-"an avenue of light, rocked by rolling waves,
extinguished in the evening fog"-do exactly what a poem should do.~lovely..many thanks..
(ps:there is style here)

I love the colors, the temperatures, the atmosphere and the very intimate perspective.

thanks for sharing your thoughts with me!

Hi Sue, most of these are indeed fleeting and only some will we remember. I like it!
I won't tell if my wistful dream was really wistful or real! Only a deceased person and I know. Ditto for another. "We write what we know."
..
BTW, I am a retired Community College Professor, I taught busines, more Business Law than other courses.
Sooooo, I read your very nice "changing sexual norms and Twilight" essay. I'm what you call religious (I don't call it that) but wasn't very 'religious' at one time. I have a lot of fleeting memories of my 'other lives.'

so many examples of beautiful, fleeting things...your poem reminds me of a butterfly flitting across a meadow of wildflowers

Sue, your poem has so many beautiful images. Great photo, too.

I am also taking away the blog address for JAJance. Thank you!!

The light of sunset on the ocean being eclipsed by the fog-- what an amazing image. The second stanza perfectly describes my favorite early evening image. Very nice.