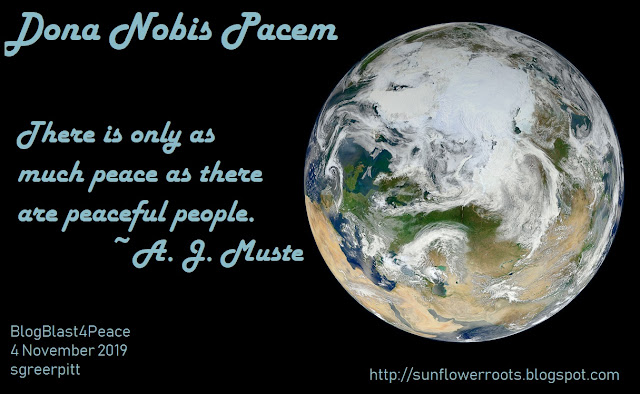 "There is only as much peace as there are peaceful people."

I first encountered these words by by A. J. Muste (Abraham Johannes Muste) in the spring of 1972 in long poem "Staying Alive" by Denise Levertov a British born American poet. It was only decades later with the advent of the internet and Google that I finally learned about A. J. Muste a Dutch born American clergyman and activist.


[Both Levertov and Muste were immigrants who contributed much to the development of this country - it should never be forgotten that so much of what we are as a country comes from immigrants and their descendants.]

Muste began his work for peace and justice as a young clergyman in protests against U.S. involvement in World War I  in 1916 and 1917.  Two years later in 1919, Muste with two other clergyman helped the mostly immigrant textile workers many of whom spoke no English in Lawrence, Massachusetts organize a strike for better wages and better working conditions. For the rest of his life until he died in 1967 Muste was engaged in social justice and anti-war/peace causes. It was A. J. Muste who introduced a young college student and seminarian named Martin Luther King, Jr. to the notion of nonviolent activism.

Recently I came across another quote from Muste that reflects my own evolving sense of what it means to be an activist for peace:


"In a world built on violence, one must be a revolutionary before one can be a pacifist."

Muste did not mean "revolutionary" in the sense of engaging in violence against violence, but rather one must focus on ending social injustices first.  In the same essay as the above quote, Muste went on to say:


“There is a certain indolence in us, a wish not to be disturbed, which tempts us to think that when things are quiet, all is well. Subconsciously, we tend to give the preference to ‘social peace,’ though it be only apparent, because our lives and possessions seem then secure. Actually, human beings acquiesce too easily in evil conditions; they rebel far too little and too seldom. There is nothing noble about acquiescence in a cramped life or mere submission to superior force.”

This hits home strongly to me. I think of all the people I know who don't want to talk about or think about "politics."  Because it is contentious and disturbing and hardly "peaceful." Moreover thinking and talking about politics includes risks of disagreement with people we care about, family members and friends. Many people want to vote in elections and then turn their minds off and let someone else (elected officials, etc.) take care of everything.  There are times when I find this appealing, to just turn off to politics and power. But that is not the way to peace, because genuine peace is not "social peace" as Muste said.

According to Muste, the foremost task of pacifists:

“is to denounce the violence on which the present system is based, and all the evil — material and spiritual — this entails for the masses of men throughout the world…. So long as we are not dealing honestly and adequately with this ninety percent of our problem, there is something ludicrous, and perhaps hypocritical, about our concern over the ten percent of violence employed by the rebels against oppression.”


"Those who can bring themselves to renounce wealth, position and power accruing from a social system based on violence and putting a premium on acquisitiveness, and to identify themselves in some real fashion with the struggle of the masses toward the light, may help in a measure — more, doubtless, by life than by words — to devise a more excellent way, a technique of social progress less crude, brutal, costly and slow than mankind has yet evolved."


When I read this I think of Colin Kaepernick, who did not know when he first took a knee that he would end up with a Nike contract, he took a risk to identify with victims of police violence, to condemn a system that does violence to minorities.

Working for peace requires risks. May we all be willing to take some risks in the year to come in the cause of peace.