I was having difficulty sleeping last night, something that seems to occur fairly often to me, and started thinking about something that happened a little over eight years ago.  Here's the story:

We were getting a new house. I was 60 years old and buying my first new house, taking on my first conventional mortgage. The whole situation was fraught with anxiety from the start. My husband was terrified of taking on a mortgage, but our current house – a thirty-year-old, improperly installed double wide - which we owned outright through a completed land contract, was falling apart. There were gaping holes in the floor covered with a patchwork of boards and other places where the particle board sub-floor was so damp that it sagged in great wallows. The roof leaked in six different places. The stove top and oven had all died, and the dishwasher had never worked. Only one of the two toilets functioned. Renovations were out of the question. So we bought another, new, shiny, double wide manufactured home, to locate on another part of our property from the original falling down double wide trailer. This is important to the story: we were moving into a new house, but it was only 10 feet away from the original at the same 911 street address.

The new house was delivered two days before Thanksgiving 2010. It took three weeks more weeks before it was properly installed, tied down, underpinned, skirted, with steps and stoops front and back. The next week the plumbing was begun and the electric utility arrived, on exactly the date and time scheduled. The electric utility was a marvel. Our utility company had a centralized office which coordinated all the activity on the job and we had one contact with a single person who managed all aspects of the job – and it was a big job. They had to run a new line from a completely different direction, get right-of-way permissions from other homeowners, have trees cut down, and install a new pole and transformer. Everything worked like clockwork. The electricity was turned on. The house warmed up, the heat pump company came and installed the heat pump. Then with heat in the house the plumbers came back and connected the water line and finished the septic connection. The old house was disconnected and the new house had functioning water and sewage in less than 6 hours. We only had to use the porta-potties twice. It was breathtaking how smoothly everything went, until we got to the telephone service. 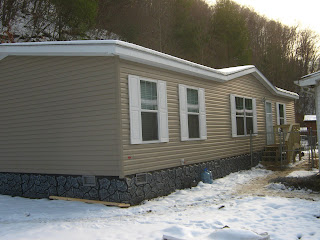 We had a land line from AT&T. Because we live in the mountains with some pretty harsh weather both winter and summer, electrical outages are fairly common. We averaged five to ten power outages a year (varying from an hour to ten days) and not even one land line outage. Phone lines can come down without shorting out, unlike power lines.  I didn’t want to trust our lives to an internet connection for phone. Those mountains also made (and still make) our property a dead-zone for cell phone service.

I contacted AT&T several weeks in advance of our move. The problem began with that first conversation. I told the person in customer service that we were “moving” from one building to a new building on the same property at the same address. The service rep typed “moving” into the computer and started taking information. That’s when the trouble began. He needed two addresses one for service to be terminated and a second address for new service to be started. No matter how many times I explained it, he couldn’t understand why I didn’t have a different address for the new service. I couldn’t just ask for a stop/restart, because work crews were going to have to come out and string entirely new line in a different direction for the new house. The service rep’s bright idea was to use our current address 136 and then change it by 1 number making it 135. The computer would accept that when it wouldn’t accept the same number. Then it turned out that the earliest that we could get this service change would be January 21, almost a month after we moved into the new house.

On our own we came up with a brilliant solution for that month. The houses were so close together that we bought new wireless phones, plugged the based phone into the still working old house phone lines, and set up the wireless extensions inside the new house. It worked like a charm, until January 21st when AT&T cut off the old service, but no one showed up to hook up the new service. They’d told us the guy would be there in a window between 8 AM and 5 PM (you know how that goes). I took off work, on a bitter cold day with snow and ice on the ground to wait for the truck to show up. It didn’t. The next day, during customer service hours, I drove two miles from my home where I have no cell service and sat in the car to call AT&T. They could not explain why we had not received a service visit, but rescheduled one for the next week. The next scheduled visit came and went without anyone showing up. The next day, I needed to call customer service but it was 10 degrees above zero Fahrenheit and with two feet of snow on the ground. I wasn’t going anywhere in my car. I walked around outside and finally found a spot where I could get 2 bars on my cell phone it was in the middle of snow covered road where I, bundled up three or four layers with hats and gloves and scarves, dialed customer service.

If you’re not an AT&T customer or have never called their customer service, you probably don’t know that AT&T has dozens of customer call centers in widely separated geographic locations. Every time you place a call you end up with another call center and another customer service agent. It is never possible to call back to someone you’ve talked to before. Each time you call you have to explain the entire story from the beginning all over again. On that day, I talked to six different customer service agents in at least five different call centers. I would explain my story and get put on hold and then after holding for 10 to 20 null the phone would go dead. They kept asking me for a number for a call back later that day or the next day. And I would explain once again, that I had no phone at which they could call me back, because I had no phone service in my home, and my cell phone only worked in the middle of the road, and I was not going to sit outside in 10 degree weather on the off chance that someone might call me back in a few hours or “sometime tomorrow.”

On the fifth call I was in the middle of a call out there in the road in 10 null weather, with someone who actually seemed to be sympathetic and helpful, and I slipped on the ice, fell in a snow bank, losing hold of the cell phone in a snow bank. By the time I recovered it the connection was gone. With my hands increasingly numb I dialed the service number again. Of course, I got yet another call center and another service rep, and had to begin my explanation all over again.  She too wanted to know if she could “check into it and call you back later today.”  At that point, 3 PM with the sun and the temperature dropping, having been without phone service for 10 days, I began weeping hysterically. I sobbed uncontrollably. Suddenly, the service rep entire manner changed, and she immediately transferred me to some supervisory person, who stayed on the phone and talked me down from my hysteria until I was able to able to choke out my story one more time with some degree of coherence.

This supervisor, without putting me on hold, contacted to work crews in my area.  She was able to ascertain that 99% of the problem was that the address of 135 (that the initial pencil pusher put in the system) was “not a legitimate 911 address”. The supervisor then directly linked me to the field workers so that I could give them directions to my home, and guaranteed that they would be there within the hour (they were there in 50 minutes) and that I would have telephone service before the day was over. Over a period of 10 days, I had talked reasonably, clearly, and respectfully to at least 8 different customer service agents. None of whom had been able to tell me why we weren’t getting the scheduled service visits, none of whom was able to solve my problem. But with one totally unplanned, spontaneous, break down into hysteria and tears got me hooked up with someone who had all my telephone problems solved within 8 hours.

The workmen who showed up at 4:00 PM as twilight was falling, who had to climb poles and crawl under my house in temperatures hovering just above zero degrees Fahrenheit, were not at all happy about the situation.  They grumbled a lot, but they got the job done.

There was one really odd note in the evening. Not long after it got dark, one of the workmen came to the door to ask me if I knew whether my neighbor’s “German shepherd dog” was friendly or not. He said the dog was sitting up on the hillside and staring at them, and it made them nervous. I told him that he must be mistaken. No one in our neighborhood had a German shepherd. One neighbor had an old coon hound that spent a lot of time in the hills above our house, and another had a black lab, but there were no German shepherds. I told him all the neighborhood dogs were friendly. He did not seem to be fully reassured but went back to work, and nothing more was said about the dog. They finished the work and left about 11 PM that night. It was two or three days later that I realized that the unfriendly “dog” they had seen on the hill was probably a coyote because quite a number of coyotes live on the old strip jobs in the hills above us. They come down into the neighborhoods looking for stray cats and other small animals to kill for food. I was really glad that they had not realized they were being scrutinized by a coyote!

I am still astounded by how quickly I got service and assistance after my breakdown into tears and hysteria. Why couldn't I have gotten that kind of service long before things things reached such a state?
Posted by Sue at 2:02 PM

Hope it's all worked out Sue. New can be wonderful! I long to own a home again, in spite of having a nice apartment now. It's just not the same. Sounds like you made the right move, even with some challenges.

Hugs to you and happy week.😊