Some thoughts on exercise/step monitors 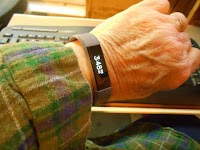 A little over two years ago my primary physician read me the riot act. She told me to start moving more or die. I was 307 pounds, had type 2 diabetes and rheumatoid arthritis.  I knew she was right in principle, but knew her blithe pronouncement that I should just start walking 20 minutes a day, at a time when I couldn't walk 5 minutes without getting out of breath, was unrealistic.

I already had a Fitbit One, though my use of it was irregularly and without much focus. I used the incomplete data I had to see roughly where I stood in terms of daily steps.  On the days I was using the Fitbit I was averaging about 900 steps a day. So I gave myself the goal of 1100 steps a day - a manageable goal.  Once I was doing that consistently (within a few weeks), I upped it to 1300 steps a day. Within another month I increased the goal again. Before long I was consistently recording 2000 or more steps a day.

I lost 60 pounds. Which was great. And I felt so much better.  But a year and a half later I was a little frustrated. I didn't feel like the Fitbit One was accurately assessing the amount of effort that I put in.  I increased my overall activity level - both the intensity of my "exercise" but also my NEAT (Non-exercise activity thermogenesis) and it just wasn't showing up in my Fitbit record. I would struggle to add steps, but it didn't seem to make a difference in calories burned. Not to mention that activities that I did like house cleaning or yard work that made me sweat, pant and left me exhausted, were barely a blip in the record because not that many "steps" were taken in doing them.

I can only speak for myself, but I suspect that others have the same experience: having rheumatoid arthritis and substantial osteoarthritis in back, knees, ankles, and feet makes movement challenging.  While pain is reduced by keeping moving, getting moving takes more effort. And when one is moving an obese body with painful joints the level of effort is even greater.

When I retired this spring, I decided to try something else.  I got a Fitbit Alta HR which has a heart rate monitor in it, and that changed the way Fitbit recorded my exercise. My simple walks had the same number of steps (in the beginning) but the Fitbit now recognized that my effort was "cardio" and "peak" heart rates. When I added up and downhill on my walks the increased effort was noted. Calorie burn recorded increased.

This may not work for everyone, but for me, having what I feel is a more accurate record of the effort that I put into activity is rewarding and encourages me to set and achieve higher goals.
Posted by sgreerpitt at 4:01 PM

My sister and law uses a Fitbit, and tells me how she is doing quite often. I didn't realize it had more features than tracking footstep and miles. Thanks for lots of good information.

Sandy - some Fitbits do only track steps and miles, but others incorporate additional features (for a slightly higher price).