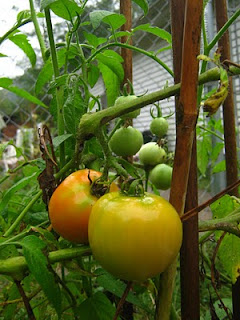 September 27 and our unusually long hot summer has extended the growing cycle of the tomatoes substantially. The presence of the large ripening tomatoes is not as unusual as the new growth -- dozens of new buds and new tiny green tomatoes forming.

This part of Kentucky is normally frost free until between October 4 at the earliest and October 30 at the latest, but usually cooling temperatures have discouraged the formation of new growth and new buds long before now. The normal average low for the month of September around here is 53 degrees F and by this time of the month, the lows normally run in the mid-forties (fahrenheit), but this year, the average low in September so far is 58 degrees F, with only one day (back on September 1) where the low was below 50 degrees.

While it is pleasant to have new tomatoes growing on the vine in late September, this disruption of past patterns of plant growth cycles for this region, has the potential to throw off the life cycles of the many types of animals, from insect life and birds, to mammals, whose times for mating, raising young, migrating, and hibernating developed under a different climatic regime. 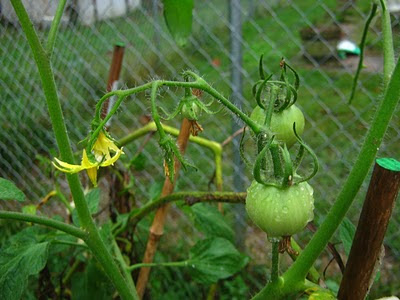 Today in our garden, covered with sleet, were yellow roses, green bell peppers (blooming and ripening), an autumn azelia (also blooming), and strawberries. The veggies were under the roof of the house a bit so they were protected from the frosts. Still it was very odd to pick a pepper covered in ice.