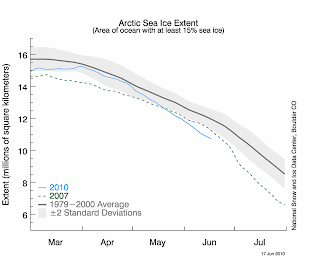 Since the summer of 2007, when Arctic ice extent hit an all time measured low, I have developed an ice watch fascination that generally sets in when the summer heat does in June.

The National Snow and Ice Data Center Sea Ice Index, provides a daily snapshot of the extent of ice in the Arctic Ocean. Both in map form and in a graph. The gray line is the average ice extent from 1979 to 2000, the green dotted line was the ice extent in 2007, the lowest ever measured. Right now, in June 2010 (blue line), the extent of Arctic ice is well below that of the recorded minimum from 2007 -- less ice, more open water, less reflected sunlight, more absorbed heat. This does not automatically mean that we will set a new record in 2010 for the smallest ice extent, because Arctic winds and storms can retard ice melting (and increase it); but a new record low ice extent does seem to be possible this year.
Posted by Sue at 12:50 PM