the heartbreak of autumn

golden leaves
whose greatest beauty
is in the falling.
I grew up in the San Francisco Bay area, in a suburb constructed in the late 1940's and early 1950's, where "autumn" meant the return of rain after six dry months. The few straggly deciduous trees planted by the developers dropped their leaves without any real color change, and homeowners scrambled to quickly capture every stray leaf as soon as they hit the ground.

My first real autumn experience came when I went to college in Oberlin, Ohio. The streets of this small mid-western town were thickly lined with huge maples which turned brilliant colors. Great piles of leaves banked in the streets and yards. I knew from that first fall, I could could never go back to California's seasonless world on a permanent basis. I've managed to live the last 32 years in places that are splendidly outfitted in the finest of autumns scarlet, flame and gold -- Kentucky, Pennsylvania and Virginia (and Kentucky again).

Each year it is a new miracle. There are trees that seem lit from within. There's a hue of rose that a select few maples pass through that never fails to overwhelm me. It's the impermanence of these moments of color that thrills me. Autumn breaks my heart every year, because there's no way to hold on and make it last. The only solace is knowing that it will come again. 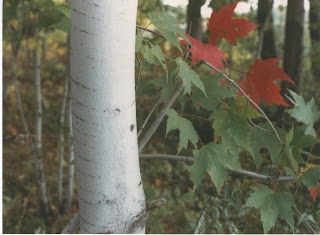 Sometimes the occasional photograph will capture a fragment of the experience, revealing the density of color. (early autumn leaves on the campus of University of Pittsburgh at Johnstown, PA).
The only painting I ever saw that captured the heartbreaking intensity of autumn color, is Pavel Tchelitchew's "Hide and Seek" in the collection of the Museum of Modern Art (New York). No reproduction of that painting does it justice.
Global warming is very apparent to me in the autumn. The summer and fall of 2006 were wet and warm, and the autumn color display was late, beginning well into October, and lasting into early November. This year, 2007, the drought that plagued Kentucky and the southeast, caused the autumn colors to begin normally in late September (lack of water as well as frost, can shut down the chlorophyll factory). But, the color has persisted even longer than last year.

It is now middle of November, and the hills are still brilliant with leaves, long past normal. I should be writing poems about Novembers gray and ghostly forests, not autumn colors. I try to drink in all the color I can while it lasts. I wonder, will these scarlet, flame and golden hills wither away completely with climate change? Will memory have to last a live time rather than twelve months some day?

Footnote, for the curious:

"When leaves appear green, it is because they contain an abundance of chlorophyll. Chlorophyll masks other pigment colors. Anthocyanins, in turn, mask carotenoids. As summer turns to autumn, decreasing light levels cause chlorophyll production to slow. However, the decomposition rate of chlorophyll remains constant, so the green color will fade from the leaves. At the same time, anthocyanin production in leaves increases, in response to surging sugar concentrations. Leaves containing primarily anthocyanins will appear red. Leaves with good amounts of both anthocyanins and carotenoids will appear orange. Leaves with carotenoids but little or no anthocyanins will appear yellow. In the absence of these pigments, other plant chemicals also can affect leaf color. An example includes tannins, which are responsible for the brownish color of some oak leaves." http://chemistry.about.com/library/weekly/aa082602a.htm