The End of January - almost

It is closing in on 1 am, my husband has been asleep for hours, but my brain won't shut down. I worry about getting up in the night, it might disturb the doggies, and if they get restless they would wake my husband, and he needs his sleep. I can always take naps in the daytime, one of the many benefits of retirement and aging. 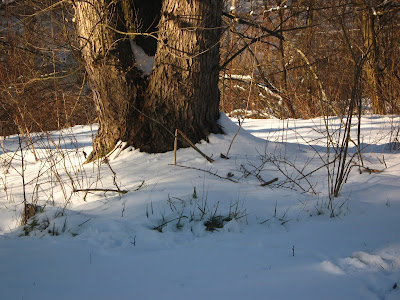 It is cold tonight but not so cold as to require a trickle to be run in the tub. The thermometer on the back porch read 25 degrees F, when we went to bed at ten. There is still snow on the ground from Wednesday night/Thursday morning, but not much. We have not had any long stretches of deep cold this winter so far. Only two nights in December when the temperature dipped into the teens, and exceedingly few days when the afternoon temperatures have stayed below freezing. Just Tuesday the afternoon high was 62 degrees F.

I am very ambivalent about this. There was a time when I loved winter. When I walked a mile from graduate housing to the Patterson Office Tower in 20 degree or lower weather and found it exhilarating. I had a whole hierarchy of clothing depending upon temperature. Below 20 degrees I set aside the jeans and got out ankle length lined wool skirts with long johns underneath.  Age, rheumatoid arthritis, and asthma triggered by cold air, make walks in temperatures below 40 degrees no longer feasible. I no longer enjoy the cold weather. But I know that these milder winters are not a good sign. No one mild winter of course can be blamed on climate change, but the pattern of milder winters that we've seen in the last couple of decades most certainly shows the influence of global warming.

Moreover, while winters have become more pleasant and less harsh, spring and summer have become hotter and more humid. The fleas and ticks have boomed in recent years with mild winters. As a family with dogs and cats this has become a major expense issue. We can no longer stop flea treatments in the winter months, with so much mild weather. The lower costs for heating do not offset the higher costs of flea treatments when one has 11 cats.

Eastern Kentucky, on the northwestern flank of the Appalachian mountains, is well situated for a changing climate. While our summers are definitely getting warmer, we are higher in altitude, surrounded by forests, and living in hollers which provide shade. The prevailing winds bring eastern Kentucky plentiful rainfall, rainfall that has been increasing over the past couple of decades. While there are occasional periods of drought (in late spring or early fall), they are both rare and short.

The population here is declining and aging. The coal industry has been in decline since it peaked in the 1920's, but it has become nearly non-existent in the past decade. Environmentally this is a good thing, but little has replaced those jobs, so communities and families are struggling. The biggest employers in most eastern Kentucky counties are hospitals and schools. However, I suspect in the long run, if we manage to maintain our society (and I sometimes have my doubts about that), eastern Kentucky is likely to become a very desirable place to live, not too cold, not too hot, and plenty of fresh water available. I do not know if I will live to see that day.

Posted by sgreerpitt at 1:29 AM

How did you manage to write this without getting out of bed?
It seems we are at the same place in our lives. We are 17º here, with 26 mph wind. I been wondering if I need to dig out my snow pants before walking around the circle to get my mail.

I knew I shouldn't have bragged last week about the 44º days!

Sandy, ah yes, well I did get out of bed and sneak out to my study to write, but still worried about disturbing the dogs (apparently did not). Never really know for sure what will set them off, so I don't usually risk it.
We had a long stretch of weeks of bad weather after that post, but what we had were ice storms (3 of them within 10 days time), and lots of sleet. It was miserable but at the same time also a sign of milder winter weather. In the past, ice storms wouldn't be likely until March or April.