In the last two days I've seen the 25 random things lists of two very different people (a fellow baby boomer poet and a 19 year old college student) which got me inspired to try. I'll bet I'd come up with 25 very different things a week from now.

25 random things about me: 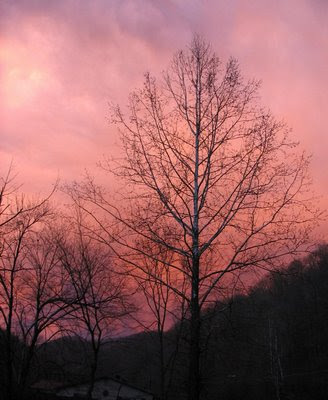 Against a sky of palest mauve
the moon, a fine china plate
etched in delicate gray,
floats between the dark hills
edged in winter’s black lace.
The road turns,
a giant sycamore looms,
stark white arms,
a shining sentinel
in the gathering dusk.

As regular readers know, Nino the cat, was diagnosed with diabetes about nine months ago, and has been receiving insulin shots twice a day since that time. Seven weeks ago he had a hypoglycemic crisis, complete with convulsions and coma, which he not only survived, but has rebounded from with amazing vigor.

The most amazing thing of all -- Nino has gone into remission. As of yesterday, he no longer needs insulin at all.

I did some research this morning, and learned that Nino's diabetes was probably the result of steroid use. Nino suffers from extreme allergy to fleas, and had been receiving steroid shots three times a year for several years. Since being diagnosed with diabetes he no longer received the shots (we give him a Capstar every days to kill the fleas instead), and that allowed his pancreas to rebound. I did learn that even diabetes that is not steroid induced can also go into remission in cats, if they eat a low carbohydrate diet.

Leads me to wonder if taking steroids has a similar affect on the human pancreas -- like the steroids in my asthma medicine Advair.
Posted by Sue at 11:13 AM 1 comment: Links to this post

Email ThisBlogThis!Share to TwitterShare to FacebookShare to Pinterest
Labels: cats and dogs

Wednesday February 11, a powerful thunderstorm with strong winds swept through eastern Kentucky, causing numerous power outages. Immediately after our power went out, the rain ended, and clearing sky in the west, allowed the setting sun to set the retreating storm clouds ablaze. Here are a few photos taken that evening.

Looking east to the retreating storm: 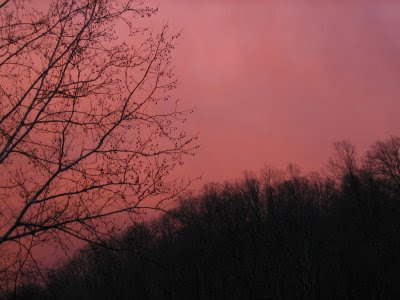 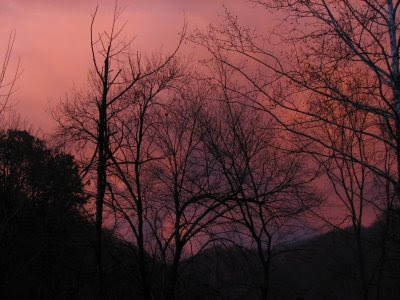 Looking west, to the clearing sky: 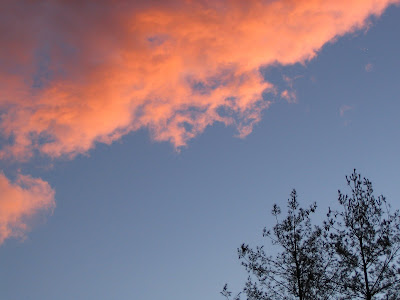 Last night as the result of strong thunderstorms and winds, the electricity and the phones went out in our neighborhood. The power and phone were still out this morning. When I got to work (where there is power) I spent an hour calling first one utility, then the other. The phone company was hopeful, they said "perhaps today;" the electricity company was less positive, "by Sunday" they said. After the calls, the first e-mail I read was a message from Earth Hour www.EarthHourUS.org, asking me to participate in Earth Hour 2009 on March 28, when everyone around the world is asked to turn off their electricity for one hour. This is the kind of coincidence that most people erroneously call "ironic" (as in the Alanis Morissette song "Isn't It Ironic"). Only problem is it isn't. It is a mildly humorous, odd juxtaposition of bad luck with another unrelated but similar event; not irony.

Irony according to Wikipedia is a

"literary or rhetorical device, in which there is an incongruity or discordance between what one says or does and what one means or what is generally understood. Irony is a mode of expression that calls attention to the character's knowledge and that of the audience.

There is some argument about what qualifies as ironic, but all senses of irony revolve around the perceived notion of an incongruity between what is said and what is meant; or between an understanding of reality, or an expectation of a reality, and what actually happens."

The Merriam-Webster On-line dictionary adds the following in addition, that irony is :

incongruity between the actual result of a sequence of events and the normal or expected result (2): an event or result marked by such incongruity b: incongruity between a situation developed in a drama and the accompanying words or actions that is understood by the audience but not by the characters in the play —called also dramatic irony tragic irony."

It isn't even "situational irony" or "cosmic irony." Situational irony is when "discrepancy between the expected result and actual results when enlivened by 'perverse appropriateness'" according to Wikipedia.

Cosmic irony or "'irony of fate' stems from the notion that the gods (or the Fates) are amusing themselves by toying with the minds of mortals with deliberate ironic intent. Closely connected with situational irony, it arises from sharp contrasts between reality and human ideals, or between human intentions and actual results." (Wikipedia)

Cosmic irony is the essence of my favorite TV show "LOST." All the effort that Jack puts in to getting his people off the island, only to realize that leaving the island was the worse thing he could do, and has to put in equivalent energy trying to find a way back to the island.

But my situation with the power outage and the e-mail, was an odd, interesting, coincidence that makes one want to wince a bit and say "ouch," is NOT ironic. Unfortunately, we don't have a good word to use for this type of slightly humorous, sometimes cruel, oddly timed, situations where bad luck and coincidence collide. So people misuse the word "ironic." I appeal to all you folks that love language -- can you think of a good, pithy adjective or adjectives that we can use instead of "ironic"?
Posted by Sue at 2:50 PM 3 comments: Links to this post

My love for you is a blackberry knife, sharp and sweet; juice flowing down my chin, staining my white shirt. Drop, drop, deep scarlet imprints bleeding hearts.

My love for you is a banana, just ripe, no brown spots; firm not squishy. It is self-contained, portable, needs no refrigeration. Not a high maintenance kind of love.

Poet Christine at Quiet Paths had a beautiful poem this morning, that describes winter as a "a hermit hiding in remote ravines." But I think that today, winter has finally let go, at least for a while in the mountains of Kentucky. There is actual warmth in the wind.
Posted by Sue at 1:32 PM 3 comments: Links to this post

The willow bends before the wind,
And suddenly I am moving in the willow's dance.
Swaying, swaying, I rise and fall in time to
the song of the wind.
Waltzing through blowing grasses
I weave in and out following the intricate patterns
of the tossing branches.
The wind quickens and so does my dance.
Round, round, I whirl like a leaf on the wind.
In a wild crescendo, the wind lifts me in its arms
for one great leap,
Then drops away to a whisper, a gentle breath
that ruffles the willow's leaves and my hair.

wind, moving the forest,
sound of a thousand branches,
a mountainside
swaying in time;
my body has become oak,
creaking before the wind,
yearning to dance
like the willow,
turning pirouettes
in my mind.

For more poems on the theme of movement see One Single Impression.
Posted by Sue at 12:43 PM 16 comments: Links to this post

Several afternoons recently, I've sat in my office at work and watched the snow storms engulf the town, and listened to the emergency notification broadcast telling me that the rest of the days classes have been canceled. 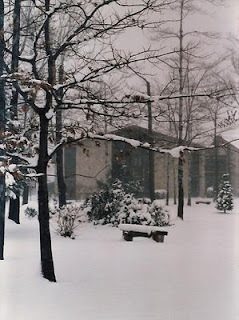 Photo of the University of Pittsburgh at Johnstown on a snow day two decades ago.
Posted by Sue at 2:59 PM 5 comments: Links to this post

So my birthday isn't actually until tomorrow, but the package came to day, and I'm stuck at home snowbound another day, so.... 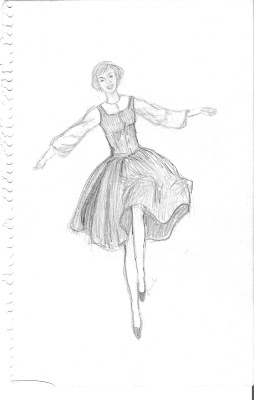 My best friend of 46 years, Betti, sent me a 40th anniversary gift set of the Sound of Music with DVD of the movie, CD of the soundtrack and coffee table book. I spent the morning listening to the sound track while reading through the book.

Betti and I spent a lot of our adolescence singing. Our favorites included many things from AM radio (Beatles, Freddie and the Dreamers, Herman's Hermits) but also musicals like Sound of Music and Mary Poppins. So memories abound as I listen to the music.

Drawing from 1968, copied from movie posters.
Posted by Sue at 1:08 PM 2 comments: Links to this post

as glaciers,
inch by inch
the heart expands
then wears away;
dunes of memory
shaped by time,
discoveries accrete,
then slide away.
slow gains endure
‘till time erodes.

All I could think of all week was the line "vaster than empires, but more slow," a line from a 1671 poem "To His Coy Mistress" by Andrew Marvell, and used by Ursula LeGuin as the title for a short story nearly four decades ago.
Posted by Sue at 10:14 PM 10 comments: Links to this post